These 2 coins from central Europe celebrate that small yet important mighty dynamo — the honeybee.

This honeybee commemorative coin set makes —
an excellent addition to any coin collection
a must for any honeybee collector
a wonderful gift for yourself or someone you know!

These 2 coins from central Europe celebrate that small yet important mighty dynamo — the honeybee.

Bees have been producing honey as they do today for at least 150 million years. Bees produce honey as food stores for the hive during the long months of winter when flowers aren’t blooming and therefore little or no nectar is available to them.  European honey bees, genus Apis Mellifera, produce such an abundance of honey, far more than the hive can eat, that humans can harvest the excess.  For this reason, European honey bees can be found in beekeeper’s hives around the world!

San Marino is an enclave in central Italy about 0.3 times the size of Washington, DC.  It is the third smallest independent state in Europe after the Holy See and Monaco.  It is reputed to be the world’s oldest republic.  San Marino was founded by a Christian stone mason named Marino in 301 A.D.

Back of San Marino coin:
Ostrich feathers and towers within a circle are shown on the front.  The towers are the Three Towers of San Marino, which appear on the flag, coat of arms, and coins of San Marino and are located on the three peaks of Monte Titano in the capital.
Lettering: “REPUBBLICA DI SAN MARINO 1974”
Engraver: Luciano Minguzzi
Edge: Plain

Slovenia is slightly smaller than New Jersey and borders on Italy, Austria, Croatia, and the Adriatic Sea.  The Slovene lands were part of the Holy Roman Empire and Austria until 1918 when the Slovenes joined the Serbs and Croats in forming a new multinational state, renamed Yugoslavia in 1929.  After World War II, Slovenia became a republic of the renewed Yugoslavia, which though Communist, distanced itself from Moscow’s rule.  Dissatisfied with the exercise of power by the majority Serbs, the Slovenes succeeded in establishing their independence in 1991 after a short 10-day war. Historical ties to Western Europe, a strong economy, and a stable democracy have assisted in Slovenia’s transformation to a modern state.  Slovenia acceded to both NATO and the EU in the spring of 2004.

Front Of Slovenia Coin:
A bee, with the Latin name “Apis mellifera” written to the right of it, and the nominal value, expressed in numbers, to the left of the bee. The Carniolan honey bee (Apis mellifera carnica) is a subspecies of the western honey bee. The Carniolan honey bee is native to Slovenia, southern Austria, and parts of Croatia, Bosnia and Herzegovina, Serbia, Hungary, Romania, and Bulgaria.
Lettering: “APIS MELLIFERA  50”

This is an amazing collectible and conversation piece that is sure to please collectors and animal buffs alike.

PARDON GLARE AND REFLECTIONS IN PHOTOS.

THERE MAY BE SOME DISCOLORATION, TONING AND/OR SPOTTING OF COINS DUE TO AGE OF OVER 25 YEARS!!!

COINS MAY HAVE SUPERFICIAL NICKS, SCRATCHES, WEAR OF FINISH AND STACKING MARKS FROM THE MINT.

This honeybee commemorative coin set makes —
an excellent addition to any coin collection
a must for any honeybee collector
a wonderful gift for yourself or someone you know! 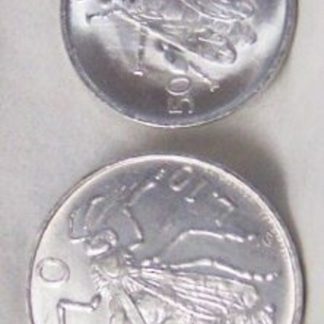