The brothers Gibb were born in the Isle of Man before moving to Manchester and then Australia and a return to England, so it is only fitting that the Isle of Man is the first nation to honour their 50th anniversary with a commemorative coin.  The coin features the Bee Gees’ famous logo and is sure to bring back memories of their greatest hits.  But it is a limited edition that is destined to be sought-after by fans around the world, so please order quickly to avoid ‘Tragedy’!

This truly remarkable coin is one that collectors and Bee Gees fans of all ages will be eager to own.  Give it as a wonderful gift or add it to your own collection today!

The diameter of this finely struck and detailed coin is 38.60 mm and it weighs 28.20 gms. Pobjoy Mint struck this silver coin four times to achieve the legendary Pobjoy ‘Proof’ finish!!!

In 1959, the three Gibb brothers – Barry, Robin, and Maurice – formed the Bee Gees, a superstar band that was one of most successful musical acts of the 1960’s and 1970’s.  Their greatest hits included ‘How Can You Mend a Broken Heart’ and songs like ‘Night Fever’ and ‘Stayin’ Alive’ from the quintessential 1970’s movie Saturday Night Fever.

The brothers were born in the Isle of Man before moving to Manchester and then Australia and a return to England. So it is only fitting that the Isle of Man is the first nation to honor their 50th anniversary with a commemorative coin.  The coin features the Bee Gees’ famous logo. Surely, it will bring back memories of their greatest hits.  But it is a limited edition that fans around the world are destined to collect. So please order quickly to avoid ‘Tragedy’!

On 10th July 2009, Barry and Robin Gibb were presented with their commemorative coin on the Isle of Man.

Own this highly collectible coin which makes a great gift for yourself or someone you know!!!!

This coin is struck to the highest PROOF quality.  The design on each coin is in relief with a glorious mirror-finish background.

Background Info For The Bee Gees:

How The Bee Gees were discovered –

The Bee Gees made their first recordings in the late ‘50s after being discovered by radio DJ Bill Gates, having heard from racing driver Bill Goode about three talented, young songwriters performing at a Speedway in Redcliffe, Australia. Their recording career would certainly expand and evolve over the course of the next several decades, but one constant was their commitment to strong musical performances and tight harmonies. There was no fixing it in post for these prolific songwriters, who cut their teeth in a world before autotune.

The brothers would record their harmonies not separately, but in tandem. The way most artists record vocal harmonies is to record one part at a time and get that polished. Then, most musical artists would stack the other harmonies on top of it. The Bee Gees would do that sometimes, but more often, they would go out with the three of them on one mic and work out how the harmonies should be, together.

Younger artists these days may ask music technicians to simply tune or clean up a track instead of doing another take, but the Bee Gees would do as many as 40 or 50 takes to make sure everything was perfect. It wasn’t because they rejected new technologies. In fact, they were quite willing to explore and invest in new developments as long is it didn’t compromise their musical integrity. They simply preferred to have things done correctly upfront and let the musicality come from the musicians, and not from the technicians in the control room.

The Bee Gees’ trademark harmonies were often accompanied by equally rich orchestral or brass arrangements. Though none of the brothers had ever learned read music, that never stopped them from constructing lush musical worlds. Merchant said Barry would typically sing the instrumental ideas he had, which would then be transcribed and performed by other musicians.

We enlarge photos in this listing to show details.

Pardon glare and reflections in photos.  Look carefully at photos and you will see the mirror-like surfaces of the coin reflect the camera lens and fingers!

Coin may have superficial scratches and/or minor wear of finish and/or nicks from way the mint stacks these coins.

Importantly, coin we send to you may vary somewhat from that shown but will be in same general condition.

This Bee Gees 50th Anniversary IOM Silver Proof Commemorative Coin makes a great collectible commemorative coin gift. For yourself and/or someone you know.

Don’t miss your chance to own a piece of music entertainment history!

Please be sure to read listing carefully, thoroughly, and completely. Ask questions before buying so you are completely satisfied with your purchase. 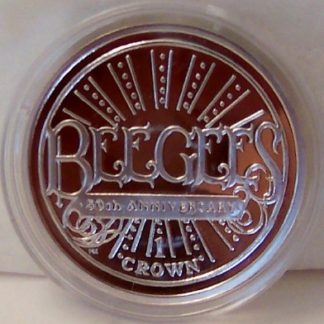