This collectible figure of Boba Fett (Prototype) is packaged in a colorful window box which has the Walgreens Exclusive sticker.

Explore the Galaxy’s most infamous Bounty Hunter’s origins with this new Boba Fett Pop! Vinyl Figure. Boba Fett is in all white armor and has his gun!

This listing is for one New In Box:

Walgreen’s Exclusive: Inspired by designer toys and stylized character collectibles the world over, Funko is back with Pop! Bobble-Heads.  This collectible figure of Boba Fett (Prototype) is packaged in a colorful window box which has the Walgreens Exclusive sticker.

Explore the Galaxy’s most infamous Bounty Hunter’s origins with this new Boba Fett Pop! Vinyl Figure. Originally designed in 1978 by Joe Johnstone, the early prototype for Boba Fett featured an all white armor, and introduced much of Boba Fett’s trademark weapons and accessories. This Boba Fett (Prototype) Pop! Vinyl Figure is a must have for all you Pop! and/or Star Wars collectors out there.

This POP! Funko Boba Fett is going to look great wherever you place him.

Boba Fett was a human male crime lord and former bounty hunter whose career spanned decades, from the fall of the Galactic Republic to the end of the rule of the Galactic Empire. Boba emulated his father and genetic donor by wearing a customized suit of Mandalorian armor.  Trained in combat and martial skills from a young age, Fett was one of the most feared bounty hunters in the galaxy during the reign of Emperor Palpatine. He became a legend over the course of his career, which included contracts for both the Empire and the extensive criminal underworld.

PHOTOS IN THIS LISTING HAVE BEEN ENLARGED TO SHOW DETAILS.

Box may have minor shelf wear as sold by Walgreens.

These figures as sold new by Walgreens have minor scuff marks and uneven paint.

Colors of figure you receive may vary from that shown as dye lots vary.

Products may contain sharp points, small parts, choking hazards, and other elements not suitable for children under 12 years old.

Collect all our Disney POP! Vinyl Figures by Funko, each sold separately.

This Disney Boba Fett (Prototype) Walgreens Exclusive POP! Funko collectible makes a great gift for yourself or someone you know.

TO AVOID DISAPPOINTMENT,
BUY IT NOW!! 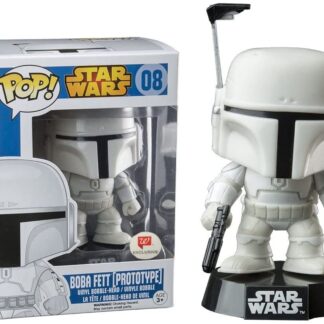