This pin features Captain Hook and Smee from Peter Pan, holding a treasure chest full of gold and jewels. (No real gold or real jewels are on this pin.)

Date of Release January 22, 2015.
Also, about 1.5” H max dimension and about 1.5” W max dimension.
Further, #1 Post with #1 Mickey Pin Back.
Most noteworthy, this pin was only available to Disney Visa Card Member holders.
Furthermore, @Disney, Enamel cloisonné, and Made In China.

Date of Release January 22, 2015.
Also, about 1.5” H max dimension and about 1.5” W max dimension.
Further, #1 Post with #1 Mickey Pin Back.
Most noteworthy, this pin was only available to Disney Visa Card Member holders.
Furthermore, @Disney, Enamel cloisonné, and Made In China.

Peter Pan is a 1953 American animated fantasy-adventure film.  Walt Disney produced the film and based it on the play Peter Pan, or The Boy Who Wouldn’t Grow Up by J.M. Barrie.  Also, it is the fourteenth film in the Disney Animated Canon, and RKO Radio Pictures originally released it on February 5, 1953 by.  Notably, Peter Pan is the final Disney animated feature RKO released before Walt Disney’s founding of his own distribution company, Buena Vista Distribution, later in 1953 after the film’s release.

In this Disney animated film, a magical boy named Peter Pan amazes Wendy and her two brothers when he flies into their bedroom, supposedly in pursuit of his rebellious shadow.  Noteworthy, he and his fairy friend, Tinkerbell, come from a far-off place called Neverland, where children stay perpetually young.  In fact, Peter enchants the kids who follow him back.  But when Pan’s nemesis, the pirate Captain Hook , causes trouble, the kids begin to miss their old life.

Captain Hook is the main antagonist of Disney’s 1953 animated feature film, Peter Pan.  Notably, he is the villainous and bloodthirsty commander of The Jolly Roger.  Importantly, Hook has long since abandoned sailing the high seas in favor of seeking revenge on Peter Pan for cutting off his left hand and feeding it to a crocodile.  Indeed, the croc has since constanttly pursued Hook.  While a worthy opponent for Peter, Hook is destined to fail.

Mr. Smee is the secondary antagonist of Disney’s 1953 animated feature film, Peter Pan.  He is Captain Hook’s loyal first mate, though his bumbling behavior often prevents him from being much help.  Noteworthy, “Save me, Smee!” is one of the most prominent quotes of Captain Hook.

In fact, we have a very limited supply, so to avoid disappointment

Surely, to ensure your complete satisfaction, ask questions before buying. 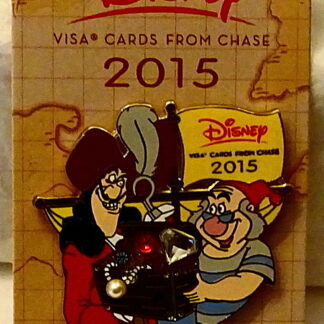