Buy this Darth Vader & Stormtrooper Helmets Star Wars Die Cast New to collect yourself.  Or give it to someone you know!

FIRSTLY, @2015 Hasbro.
Importantly, these are 2 detailed helmets that look like those worn by Darth Vader and Stormtoopers from Star Wars.
Further, each figure comes with a clear plastic removable display stand.
Thus, includes 2 helmets and 2 removable display stands.
Notably, Darth Vader helmet on stand is about 3 inches high.
Noteworthy, Stormtrooper helmet on stand is about 2 inches high.
Materials: die cast and plastic.
Actually, for Darth Vader helmet, only the outer shell is die-cast metal with a high gloss paint job.  The inner/lower portion is plastic with a matte finish that makes the paint appear almost like a dark grey instead of black.
Finally, Made In China.

Re-live the timeless adventures of a galaxy far away and collect the moments of iconic action of Star Wars with these Darth Vader and Stormtrooper Titanium Series helmets.  Indeed, these helmets are detailed with true-to-story design and features.  Crafted to look just like the helmets worn by the loyalist soldiers of the Galactic Empire, and Darth Vader, the heroic Jedi Knight who was seduced by the dark side to become a Sith Lord and a leader of the Empire’s eradication of the Jedi Order.  Commemorate the thrilling action of Star Wars with these Titanium Series helmets from The Black Series that come with clear plastic stands for easy, awesome display.  No Star Wars collection – or adventure – is complete without these Titanium Series Darth Vader and Stormtrooper helmets!

Hasbro and all related terms are trademarks of Hasbro. Star Wars products are produced by Hasbro under license from Lucasfilm Ltd.

Background For Darth Vader And Stormtrooper:

Stormtroopers are elite shock troops fiercely loyal to the Empire.  Indeed, it is impossible to sway them from the Imperial cause.   Importantly, they wear imposing white armor.   In fact, they have a wide range of survival gear and temperature controls to survive in almost any setting.  Notably, stormtroopers wield blaster rifles and pistols with great skill.  Further, they attack in hordes to overwhelm.

Once a heroic Jedi Knight, Darth Vader was seduced by the dark side of the Force, became a Sith Lord, and led the Empire’s eradication of the Jedi Order.  He remained in service of the Emperor — the evil Darth Sidious — for decades, enforcing his Master’s will and seeking to crush the fledgling Rebel Alliance.  But there was still good in him…  When the Emperor shot Force lightning into Luke, torturing him, Vader rose, the good in him awakened by his son’s compassion, and destroyed the Emperor.  While he had suffered fatal injuries from the Emperor’s lightning, Vader’s redeeming final act restored his consciousness to Anakin Skywalker, and he had one last moment with Luke before peacefully accepting his death.

Firstly, we enlarge photos to show details and out of box photo is a stock photo.

Noteworthy, Hasbro sells these items as new with minor imperfections.

In addition, box may have minor shelf wear as sold new by Hasbro.   This includes rips, tears, folds, and/or creases.

Furthermore, helmets and stands may have minor nicks and scratches and paint finish on helmets has minor imperfections as sold new by Hasbro.

Buy this Darth Vader & Stormtrooper Helmets Star Wars Die Cast to collect yourself.  Or give it to someone you know! 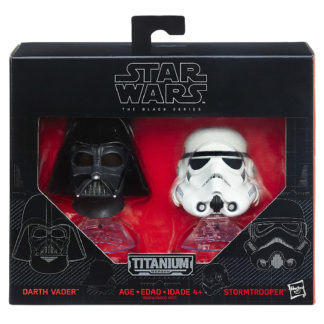