Buy this  Disney Celebrating Years Pin Mickey Tink Spinner New On Card to collect yourself.  Or give it to someone you know!

Tinker Bell (also nicknamed Tink or Miss Bell) is a sassy fairy and major character in Disney‘s 1953 film, Peter Pan. She is Peter Pan‘s sidekick, and regularly joins his exploits throughout the magical isle of Neverland.

In the many years since her inception, Tinker Bell has become one of the main spokes-characters for The Walt Disney Company (along with Mickey Mouse and Jiminy Cricket) and one of its most popular and iconic characters (mostly known for flying toward the screen with a thin wand in her hand, waving it and causing fairy dust to fly out to the screen).

Buy this Disney Celebrating Years Pin Mickey Tink Spinner  to collect yourself.  Or give it to someone you know! 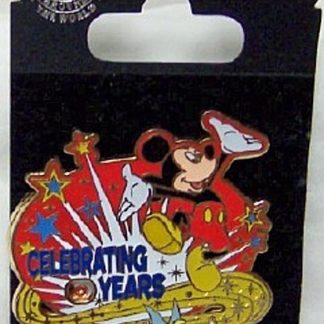