Firstly @Disney.  Next, figurine is about 2 inches H x 1.5 inches W x 1.5 inches D maximum dimensions.  Importantly based on the Winnie the Pooh works of E. H. Shepard & A. A. Milne.

This Disney Winnie the Pooh Eeyore 2 Inch Figurine New In Pack makes a unique collectible gift for yourself or someone you know.

Firstly @Disney.
Next, figurine is about 2 inches H x 1.5 inches W x 1.5 inches D maximum dimensions.
Importantly, Eeyore is a character from the Winnie the Pooh works of E. H. Shepard & A. A. Milne.

Eeyore is a pessimistic, gloomy, depressed, and anhedonic old stuffed donkey.  Further, Christopher Robin owns him and he is a friend of Winnie the Pooh.  Noteworthy, Disney first cast him in the 1966 theatrical short Winnie the Pooh and the Honey Tree.

Sawdust  is  Eeyore’s filling.  In addition, Eeyore lives alone, underneath a small, teepee-style house made of sticks.  Notably, a running gag is that something almost always knocks over Eeyore’s home, forcing the gloomy donkey to rebuild it from scratch, usually at a different location.  Also, he has his own area in the Hundred Acre Woods known for its dismal atmosphere.  Indeed, “Eeyore’s Gloomy Place” is where he typically sulks under a rain cloud or eating thistles.

Apart from his cynical personality, Eeyore’s tail is perhaps his most defining trait.  In fact, despite a nail pinning it down, Eeyore’s tail frequently detaches from his bottom and winds up getting lost for a period of time.  Thus, Christopher Robin often needs to reattach it.

Disclaimers For This Disney Eeyore 2″ Figurine Winnie The Pooh New:

Besides, pack and item may have minor shelf wear as sold new by Disney.

Also, color and pattern of figurine you receive may differ from that shown as dye lots vary.

Most Noteworthy, Warning: Choking Hazard – Small Parts and may contain lead and other toxic elements.  Not for children under 8 years old.

This Disney Winnie the Pooh Eeyore 2 Inch Figurine New In Pack makes a unique collectible gift for yourself or someone you know.

IN FACT, OUR SUPPLY IS EXTREMELY LIMITED AND ONCE THE CURRENT SUPPLY IS EXHAUSTED, NO OTHER EEYORE FIGURINES WILL BE AVAILABLE. 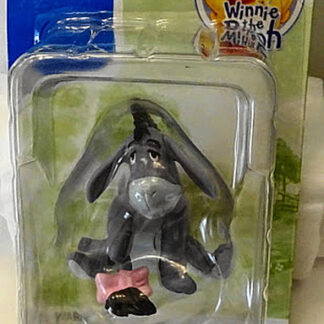