This postcard features Mickey standing in front of his “LiMouseine” in front of The Great Movie Ride.

This collectible Disney Mickey LiMouseine Postcard makes a great gift for yourself or someone you know.

This postcard features Mickey standing in front of his “LiMouseine” in front of The Great Movie Ride. Back of card says: “The official LiMouseine gives Mickey and his pals plenty of room to strrrrrrrrrretch out and enjoy a ride down Hollywood Boulevard in glamorous comfort and style.”

This collectible Disney Mickey LiMouseine Postcard makes a great gift for yourself or someone you know. 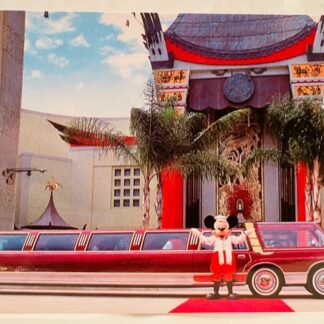