This postcard features Sorcerer Mickey standing above the Chinese Theatre with fireworks in the sky. Back of card says: “A dazzling panorama explodes over the Disney MGM Studios Theme Park’s Chinese Theatre during the evening fireworks display.”

This collectible Disney Mickey Sorcery Postcard makes a great gift for yourself or someone you know.

This postcard features Sorcerer Mickey standing above the Chinese Theatre with fireworks in the sky. Back of card says: “A dazzling panorama explodes over the Disney MGM Studios Theme Park’s Chinese Theatre during the evening fireworks display.”

This collectible Disney Mickey Sorcery Postcard makes a great gift for yourself or someone you know. 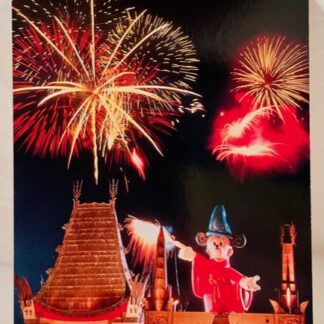