Disney on Broadway Card This is New York New

Product Summary For “Disney on Broadway” “This is New York” Advertising Promotional Card  :

This collectible“Disney on Broadway” “This is New York” 2001 Vintage Advertising Promotional Card makes a great gift for yourself or someone you know.

Product Description For Disney On Broadway Card This is New York New:

This card was given out as an insert in Playbills distributed to theater doers in 2001 – 2002.

Chock full o’ Nuts is a brand of coffee originating from a chain of New York City coffee shops. Its unusual name derives from the 18 nut shops that founder William Black established under that banner in the city beginning in 1926. The company began roasting coffee during the Great Depression. “Chock full o’Nuts® is the Heavenly Coffee” became its famous jingle in 1962.

Background Info For Disney on Broadway:

Founded in 1993 by longtime Disney Entertainment veteran Ron Logan as Walt Disney Theatrical, the division has gained a reputation within the industry for creating several professional and popular (both critically and financially) performances, starting with Beauty and the Beast on April 18, 1994. Its 1994 investment in taking over the New Amsterdam Theatre spurred a revitalization of Broadway theatre.[2] The company is a division of Disney Theatrical Group, led by Thomas Schumacher.

Disclaimers for this Disney On Broadway Card This is New York New listing:

This collectible “Disney on Broadway” “This is New York” Vintage 2001 Advertising Promotional Card makes a great gift for yourself or someone you know. 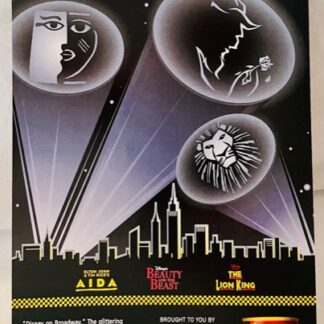 You're viewing: Disney on Broadway Card This is New York New $22.99
Add to cart