Buy this Disney Orlando Magic Vinylmation New to collect yourself.  Or give it to someone you know!

Hoop it up!!!  Surely, root for the big blue with this Orlando Magic basketball player!  Importantly, designed by Disney artists, this fan favorite is ready for action as one of 8 designs celebrating the NBA.

Vinylmation is a series of collectible vinyl designer toys .  Further, they are sold at the Disney theme parks.  Each figure is in the shape of Mickey Mouse.  As well, each features artwork by various artists.  In fact, figures are available in 3″ and 9″ varieties.

The Orlando Magic are an American pro basketball team based in Orlando, Florida.  The Magic compete in the NBA as a member of the Eastern Conference Southeast Division.  Significantly, it was established in 1989 as an expansion franchise.  Notably, such NBA stars as Shaquille O’Neal, Penny Hardaway, Patrick Ewing, Grant Hill, Tracy McGrady, Steve Francis, Dwight Howard, and Vince Carter have played for the Magic.   As of 2017, the franchise has played in the NBA playoffs for exactly half of its existence.  In fact, this equates to 14 playoff appearances in 28 years and twice went to the NBA Finals, in 1995 and 2009.  Most noteworthy, Orlando has been the second highest winning percentage team of the 4 expansion teams brought into the league in 1988 and 1989.

Also, photos showing figure out of box are stock photos.

Further, color of item you get may vary from that shown.  Due to different dye lots.

In addition, box may have minor shelf wear as sold by Disney.   This includes rips, tears, folds, and/or creases.

Not for children under 8 years.

Buy this Disney Orlando Magic Vinylmation New to collect yourself.  Or give it to someone you know! 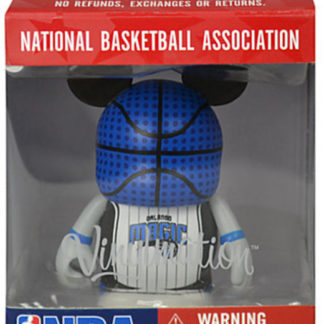