Each coin has a front side which shows a Pinocchio character and a back side featuring commemorative title and the film’s original release date: ”Pinocchio – February 7, 1940”.  Characters include Pinocchio, Geppetto, Jiminy Cricket, The Blue Fairy, Figaro, Cleo, J. Worthington Foulfellow (Honest John), Gideon, and Stromboli.

Capsules may not be sealed closed as sold new by Disney so be careful when handling.

This listing is for one NEW IN WOODEN PRESENTATION CASE:

Each coin has a front side which shows a Pinocchio character. Further, each coin has a back side featuring commemorative title and the film’s original release date: ”Pinocchio – February 7, 1940”.

Protective plastic sheet on front glass of case has never been removed.

Certificate of Verification you will receive is numbered 238 of 1936.

Give a little whistle!   Makes no difference who you are, this fine, limited edition boxed set of nine silver plated coins will dazzle you!!! These coins feature the immortal cast of Walt Disney’s animated classic Pinocchio. Each coin is minted in the U.S.A.

The Adventures of Pinocchio (1936) was an ill fated film that began on January 1935.  That is when politician Alfredo Rocco decided to commission the first Italian produced animated movie at the newly formed studio CAIR. CAIR stood for Cartoni Animati Italiani Roma. The studio chose to adapt the “Adventures of Pinocchio” by Collodi as their first film. Had this film been finished and publicly been released in 1936, it would have been the first animated film based on Carlo Collodi’s book “The Adventures of Pinocchio”. In actuality, Disney’s second animated film, Pinocchio (1940) captured that honor. The Limited Edition of 1936 for this Disney Pinocchio Coin Set may be an homage to this first attempt to make an animated Pinocchio film.

Walt Disney, expressed interest in Pinocchio as early as 1934. He staked his “claim” with the Motion Picture Producers and Distributors of America, and announced the project to the press in 1935. By the end of 1936, he was already able to compete for the rights to the book. Furthermore, in 1937 he started work on his film adaptation. A 1936 article states that the rights were “exclusively” in the hands of C.A.I.R.. Thus Disney had to abandon the project for some time. The contract was finalized only in June 1938.

First, capsules may not be sealed closed. Disney sold them this way so be careful when handling.

Next, we enlarged photos in this listing to show details.

Importantly, presentation Case and Coins may have minor imperfections as sold new by Disney.

Further, coins and/or their clear plastic cases may have superficial scratches and/or minor wear of finish and/or nicks from stacking during manufacture.

Also, coins may have minor spotting and/or toning and/or oxidation.

Noteworthy, these coins are not legal tender.

This Disney Pinocchio Collector’s Limited Nine Coin Collection New makes a great collectible Disneyana gift for you. Or for someone you know!

Surely, read this listing carefully, thoroughly, and completely. Ask questions before buying so you are completely satisfied with your purchase. 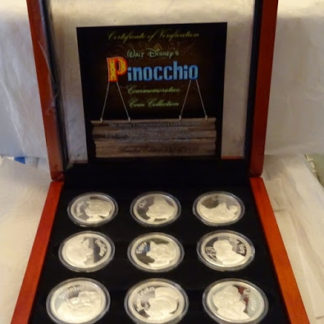