Surely, get this Disney Pixar Cars Lightning McQueen Lenticular Journal New for yourself.  Or give it to someone!

Product Features:
Firstly, @ Disney Pixar.
Next, 120 Sheets.
Notably, pages are lined with a color on the edge that serve as dividers.
Further, 4 colors used as dividers.
Also, measures about 3.5″ x 4.5″ x 0.5″.
Finally, Made in China.

Lightning McQueen, #95, is a hotshot rookie race car who loves going faster than fast.  Also, when he’s not racing, he spends his time in Radiator Springs with his best pal, Mater.

Disney Pixar Cars is a 2006 animated comedy and family film.  Notably, it tells the story of a hot-shot race-car named Lightning McQueen who gets waylaid in Radiator Springs.  In fact, here he finds the true meaning of friendship and family.

While traveling to California to race against The King (Richard Petty) and Chick Hicks (Michael Keaton) for the Piston Cup Championship, Lightning McQueen (Owen Wilson) becomes lost after falling out of his trailer in a run down town called Radiator Springs.   Significantly, while there he slowly befriends the town’s odd residents, including Sally (Bonnie Hunt), Doc Hudson (Paul Newman) and Mater (Larry the Cable Guy).  Later, when it comes time for him to leave, the championship is no longer his top priority.

Further, color of item you get may vary from that shown.  Due to different dye lots.

Also, pack may have minor shelf wear as sold by Disney.   This includes rips, tears, folds, and/or creases.

Noteworthy, not for children under 8 years.

Surely, get this Disney Pixar Cars Lightning McQueen Lenticular Journal New for yourself.  Or give it to someone! 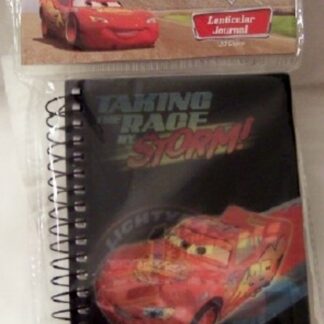