Above is Disney Stock Photo.

Tee Shirt may have minor imperfections and irregularities as sold new by Disney.

Color of Tee Shirt you receive may differ from that shown as dye lots may vary.

That’s a wrap! The end titles are rolling for The Great Movie Ride at Disney’s Hollywood Studios. Be part of Disney and Cinema history in this commemorative tee with special Annual Passholders art on sleeve. Available for a limited time only!
The bare necessities
100% cotton
Imported

Limited availability at WDW in August 2017

The Great Movie Ride closed permanently on August 13, 2017 to make way for an attraction named Mickey and Minnie’s Runaway Railway. This Tee Shirt is a farewell commemorative to this popular attraction sold only at WDW during the month of August until they were sold out.

Since the closing of The Magic of Disney Animation attraction in July 2015, The Great Movie Ride has been the last attraction from Disney-MGM Studios’ (the former name of Disney’s Hollywood Studios) opening day to remain in operation. Overview/History:
If you’re a movie buff, you didn’t want to miss seeing some old favorites in the Great Movie Ride. This attraction was housed in a full-scale replica of Hollywood’s legendary Graumann’s Chinese Theater. In the cement outside the theater were hand, foot (and paw) prints of popular Disney stars and characters.

The line for the Great Movie Ride was one of the more entertaining lines to wait on. The theater “lobby” was quite impressive. The first part featured movie memorabilia such as the carousel horse from Mary Poppins and one of the three pairs of ruby slippers from the Wizard of Oz.
The next queue section had you weaving back and forth while watching movie clips on the big screen. Some of these were a glimpse of what was recreated inside. Above is a photo of the neon theatre marquee inside of the 1930s-era Hollywood soundstage at the beginning of the ride.

From here, you entered a cavernous set where “ushers” directed you to the large trams. These were actually two sets of trams that split up early into the show. Depending on which section you were in, your tram was hijacked by either a gangster or a Western bandit while your hapless host/hostess was left behind.

Using film footage, special effects and Audio-animatronic figures of famous actors, guests were treated to scenes in this order: Busby Berkeley’s “Footlight Parade,””Singin’ in the Rain,” “Mary Poppins,” “The Publi Enemy,” “Man With no Name,” “The Searchers,” “Alien,” “Raiders of the Lost Ark,” generic mummies, “Tarzan The Ape Man,” “Casablanca,” “Fantasia,” and “Wizard of Oz.”

The ride’s finale featured a sentimental film montage sure to bring a smile. Old and new clips were combined in a memorable recollection of some classic movie moments.

Fastpass was available for this ride.

Handicapped Accessibility: Guests using ECVs had be able to transfer to a wheelchair. 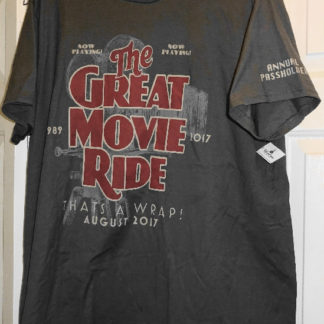