The lid features Cinderellas Castle. The tin features Mickey in the different lands in WDW –  Mickey on Main Street; Mickey in safari hat with canteen looking at butterfly in Adventureland; Astronaut Mickey in Tomorrowland; Cowboy Mickey with lasso in Frontierland.

Surely, get this Disney WDW Mickey Tin for yourself.  Or give it to someone!

This listing is for One Gently Used:

The lid features Cinderellas Castle. The tin features Mickey in the different lands in WDW –  Mickey on Main Street; Mickey in safari hat with canteen looking at butterfly in Adventureland; Astronaut Mickey in Tomorrowland; Cowboy Mickey with lasso in Frontierland.

Firstly, Remember your vacation toWalt Disney World with this cute vintage tin!
Next, @Disney.
Importantly, this magnet is unique and hard to find as it is from the 1990’s.
Finally, Made In China.

Covering nearly 47 square-miles, the Walt Disney World Resort features four theme parks: Epcot, Magic Kingdom Park, Disney’s Animal Kingdom Park and Disney’s Hollywood Studios.  Further, it is an entertainment complex in Bay Lake and Lake Buena Vista, Florida near the cities Orlando and Kissimmee.  Also, it has two water parks: Disney’s Blizzard Beach and Disney’s Typhoon Lagoon and over 20 resort hotels.  Notably, with interactive rides, animal adventures, magical attractions, dining, shopping and nearly 60,000 cast members performing in more than 3,000 different roles, guests will be sure to feel the magic of Disney during each and every visit.

Cinderella Castle was inspired by the Disney film Cinderella.  This charming building is the symbol of Magic Kingdom park.  Indeed, Cinderella Castle welcomes you to a magical world where dreams come true.  Also, the 189-foot landmark boasts lofty spires and ornate turrets.  In fact, it is the gateway to Fantasyland.  Surrounded by a moat, the grounds offer an array of picture-perfect photo ops.  Surely, explore lush lawns, gardens and Cinderella’s own wishing well.

Notably, Disney sells these items as new with minor defects and there is also minor shelf wear – see photos.

Further, color of item you get may vary slightly from that shown.  Due to computer issues.

IMPORTANTLY, WARNING: MAY CONTAIN LEAD AND OTHER HEAVY METALS.

Noteworthy, not for children under 5 years old.

Surely, get this Disney WDW Mickey Tin for yourself.  Or give it to someone!

Please be sure to read this listing carefully.  Ask questions before buying so you are fully satisfied. 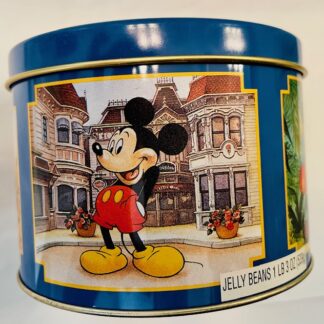