PHOTOS IN THIS LISTING HAVE BEEN ENLARGED TO SHOW DETAILS.

Color of item you receive may vary from that shown due to different dye lots.

Card and pin may have minor shelf wear as sold by Disney.

Not for children under 12 years.

Star Wars The Force Awakens (Episode 7) – features Captain Phasma flanked by two storm troopers, one on each side.

Phasma was a female individual who lived approximately thirty years after the Battle of Endor. Phasma served as a Captain Storm Trooper in the First Order and wore a reflective suit of armor similar to that of a Storm Trooper. Phasma brainwashed Finn and her other cadets by telling them that the First Order should come first in their lives above all else. The remnants of the Empire have rebranded themselves, and are now called The First Order.

Captain Phasma is shown in her cape posing with her arms crossed. The background is in a tunnel and the pin is shaped like pentagon. The Star Wars lettering is white and is on top of a red and black striped background.

The pin has a dark purple background surrounded by flames and “STAR WARS” is written in letters with white borders. The perimeter of the pin is silver colored and the border is a flame design from the gun. Released at WDW and DLR.  These pins were also released worldwide.

A MUST FOR ANY DISNEY or STAR WARS COLLECTOR!!!

SUPPLY OF THIS BEAUTIFUL PIN IS LIMITED 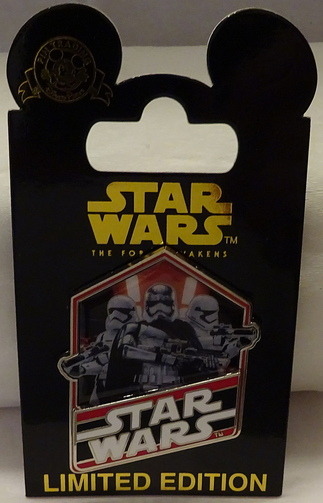