Buy this Earnhardt Jr 2012 Diecast National Guard Car New to collect yourself.  Or give it to someone you know!

Significantly, he currently competes part-time in the NASCAR Xfinity Series, driving the No. 88 Chevrolet Camaro for his team JR Motorsports.  Further, he is the son of NASCAR Hall of Fame member Dale Earnhardt Sr.

Earnhardt’s success at Daytona International Speedway throughout his career has earned him the nickname “Pied Piper” of Daytona.  In fact, he is a two-time Daytona 500 winner, having won the races exactly 10 years apart (2004 and 2014).  In addition, he has won the Most Popular Driver Award fifteen times (consecutively from 2003–2017).  Noteworthy, he has an estimated net worth of $400 million.

After driving the No. 8 Chevrolet for Dale Earnhardt, Inc. (DEI), his father’s team in the Monster Energy NASCAR Cup Series, for much of his early Cup career, he moved to Hendrick Motorsports to drive the No. 88 in 2008.  Indeed, he remained with HMS until his retirement in 2017.  Most noteworthy, Dale Jr. retired with 26 wins in the Cup Series, a total which put him in the top 40 in NASCAR history.

Also, these items are sold as new with minor imperfections.

Furthermore, item may have minor nicks and scratches as sold new.

Finally, not for children under 12 years.

Buy this  Earnhardt Jr 2012 Diecast National Guard Car Newto collect yourself.  Or give it to someone you know!

Please be sure to read this listing carefully.  Certainly, ask questions before buying so you are completely satisfied with your purchase. In fact, this listing includes free shipping to USA.  Also, ships by USPS First Class Mail with delivery confirmation. 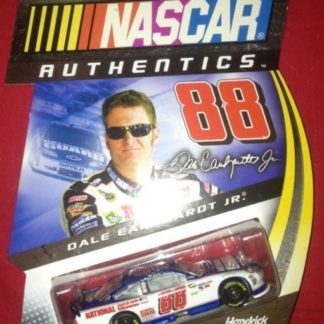