Buy this Disney The Empire Strikes Back 2015 Pin Star Wars Weekends New On Card  to collect yourself.  Or give it to someone you know!

Celebrate Disney’s Star Wars Weekends 2015, with this Classic Star Wars Films Double Hinge Pin, Featuring STAR WARS – The Empire Strikes Back!  Notably, this pin has hinges so that it opens to 3 rectangles, each with a front and a back.

The front of the pin shows 2 pictures from the movie, Star Wars – The Empire Strikes Back on the top 2 rectangles.  The top rectangle shows Darth Vader and the middle rectangle shows Luke Skywalker.  Moreover, these pictures are from the scene in which Darth Vader said to Luke Skywalker, “Luke, I am your father.”  Also, the front shows the Stars Wars logo including the movie name on the bottom rectangle.  Significantly, the back side shows “Star Wars Weekend, Limited Edition of 3900 C & Tm Lucas film LTD. P9233170-4-15058” on the top rectangle.  In addition, in the middle rectangle, the Imperial and Rebel logo is displayed.  Finally, the bottom rectangle of the back of the pin shows “V.”

Background For Star Wars The Empire Strikes Back:

Importantly, in this film, after the rebels are brutally overpowered by the Empire on the ice planet Hoth, Luke Skywalker begins Jedi training with Yoda, while his friends are pursued by Darth Vader.

In addition, card may have minor shelf wear as sold by Disney.   This includes rips, tears, folds, and/or creases.

Buy this Disney The Empire Strikes Back Star Wars Weekends 2015 Pin to collect yourself.  Or give it to someone you know! 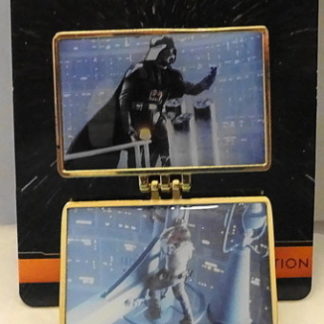