Buy this Finn Fighter Pilot Helmets Star Wars Die Cast New to collect yourself.  Or give it to someone you know!

Kids and fans alike can imagine the biggest battles and missions in the Star Wars saga with helmets from The Black Series!  With exquisite features and decoration, this series embodies the quality and realism that Star Wars devotees love.  After his first taste of combat during a brutal First Order night assault on a Jakku village, stormtrooper FN-2187 defects from Kylo Ren’s forces, becoming a fugitive.  Meanwhile, the skilled pilots of the First Order launch into combat aboard advanced fighter craft, hunting down enemy vessels and protecting space around installations and warships.  This Black Series set features two Titanium Series helmets of characters from Star Wars: The Force Awakens – Finn (FN-2187) and a First Order Tie Fighter Pilot.  This set features movie-real design and is highly detailed.  No Star Wars collection is complete without this die-cast helmet 2-pack featuring a hero and a villain from the incredible Star Wars universe!

Hasbro and all related terms are trademarks of Hasbro. Star Wars products are produced by Hasbro under license from Lucasfilm Ltd.

Finn (FN-2187) was trained since birth to serve the First Order as a stormtrooper.  However, a skirmish on Jakku awakened his conscience and drove him down a different path.  Moreover, his new proved both heroic and dangerous.  Firstly, he helped Poe Dameron escape the First Order – picking up the nickname Finn in doing so – and then sought his own freedom alongside Rey and BB-8.  Later, Finn helped the Resistance destroy Starkiller Base, but had to decide his true loyalties.  Would he continue to fight alongside the Resistance’s soldiers, or seek to reunite with Rey and flee the galactic conflict?  At first Finn tried to flee the war, but a mission alongside Rose Tico convinced him that he had to commit himself to the Resistance’s cause.

Firstly, we enlarge photos to show details and out of box photo is a stock photo.

Noteworthy, Hasbro sells these items as new with minor imperfections.

In addition, box may have minor shelf wear as sold new by Hasbro.   This includes rips, tears, folds, and/or creases.

Furthermore, helmets and stands may have minor nicks and scratches and paint finish on helmets has minor imperfections as sold new by Hasbro.

Buy this  Finn And First Order TIE Fighter Pilot Helmets Star Wars Die Cast to collect yourself.  Or give it to someone you know! 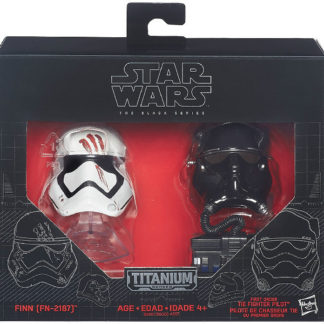