Definitely, read product description and disclaimers prior to purchase.

Surely, this The Flintstones #6 Full Color Vintage 1979 Dimensional Stickers is a great gift for yourself or someone else.

Background Info For The Flintstones:

Pre-dating The Simpsons by almost 30 years, The Flintstones was the first prime time animated show on TV.  In fact, until 1997 when The Simpsons stole the crown, The Flintstones aired the most episodes of any animated show in primetime, with 166 episodes between 1960 and 1966.  Indeed, the show was so successful, it established Hanna-Barbera as the largest producer of animated films.

Notably, Fred and Wilma Flintstone and their neighbors, Barney and Betty Rubble, live in Bedrock during 10,000 B.C.  Moreover, Fred and Barney work at a quarry, and Betty and Wilma are homemakers who are constantly at odds with their husbands.  Also, in the third and fourth seasons, respectively, kids Pebbles and Bamm-Bamm joined the cast.

The Flintstones reappeared in many other series and specials throughout the decades.   In fact, The Flintstones starred in two live-action theatrical movies and several spinoff series, including 20 episodes of The Pebbles and Bamm-Bamm Show, featuring the kids as teenagers.  Further, nearly a dozen TV specials aired, including The Flintstone Kids’ “Just Say No” Special, a couple of Flintstones holiday specials, and a made-for-TV Jetsons/Flintstones mash-up.  Importantly, along with all of the shows, The Flintstones launched multi-million dollar merchandising with Fruity Pebbles cereal and Flintstones vitamins.

Also, color and materials of item you receive may vary from that shown due to different lots.

DEFINTELY, CHILDREN UNDER 10 SHOULD NOT USE THIS PRODUCT.

Surely, this The Flintstones #6 Full Color Vintage 1979 Dimensional Stickers is a great gift for yourself or someone else.

Our supply is extremely limited. 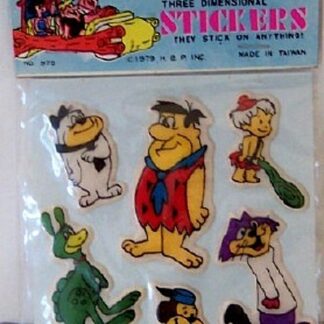