Features two Storm Troopers standing side by side holding their weapons.  Further, he pin shows a red background and “STAR WARS” written in raised white letters against a black background at the bottom of this 3D pin.  Also, the border of the pin is light blue.  Notably, Limited Edition of 10,000.  Pin is about 1.25″ X 1.75″ max dimensions.

Surely read product description including disclaimers prior to purchase.

CERTAINLY A MUST FOR ANY DISNEY or STAR WARS COLLECTOR!!!

Further, made in China.

The pin shows a red background and “STAR WARS” written in white letters against a black background at the bottom of the pin.  Further, light blue borders the pin.  Released at WDW and DLR.  These pins were also released worldwide.

FIRSTLY, WE ENLARGED PHOTOS IN THIS LISTING TO SHOW DETAILS.

Next, color of item you receive may vary from that shown due to different dye lots.

Also, card and pin may have minor shelf wear as sold by Disney.

A MUST FOR ANY DISNEY or STAR WARS COLLECTOR!!!

SUPPLY OF THIS BEAUTIFUL PIN IS LIMITED

Surely ask questions before buying so you are completely satisfied with your purchase. 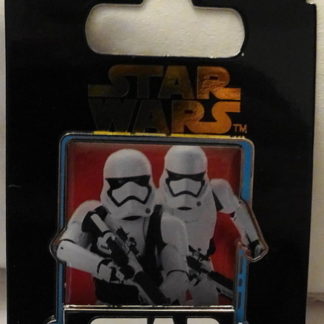