This  Walgreens Exclusive Tyrion Lannister Funko collectible makes a great gift for yourself or someone you know.

CALLING ALL GAME OF THRONES FANS!!!

Pardon reflections of hands and camera in front of box photo.

Pardon color variation artifacts in some of photos.

Box may have minor shelf wear as sold new by Funko.

Colors of figure and box you receive may vary from that shown as dye lots vary.

Last 2 photos above are stock photos.

Products may contain sharp points, small parts, choking hazards, and other elements not suitable for children under 18.  NOT A TOY!

Tyrion Lannister is a major character in the first, second, third, fourth, fifth, and sixth seasons of HBO’s hit TV series Game of Thrones.  He is played by starring cast member Peter Dinklage and debuts in the series premiere.  Tyrion Lannister is the youngest son of Lord Tywin Lannister and younger brother of Cersei and Jaime Lannister.  A dwarf, he uses his wit and intellect to overcome the prejudice he faces.

Tyrion Lannister gets his own 4-inch Funko action figure with over 20 points of articulation based on the Peter Dinklage portayal!  The Game of Thrones Tyrion Lannister Legacy Collection Action Figure is amongst the first wave of figures from Funko based on characters from George R. R. Martin and HBO’s hit TV series Game of Thrones.

When your mind is your weapon, you must keep it sharp.  There’s nothing dull about the Game of Thrones – Tyrion Lannister Legacy Figure and the ax that he holds.  The littlest Lannister has found his place among men, and among your collection.  Get this figurine with its exquisite detail recreating Tyrion Lannister in even smaller form and show that you’re the biggest of Game of Thrones fans. This listing is for only one Game Of Thrones Series One Figure  – the #2 Walgreens Exclusive Tyrion Lannister only!

This listing is for only one Game Of Thrones Series One Figure  – the #2 Walgreens Exclusive Tyrion Lannisteronly!

This  Walgreens Exclusive Tyrion Lannister Funko collectible makes a great gift for yourself or someone you know. 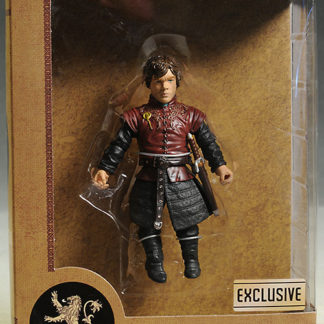