Surely, buy these  Indiana Jones Movie Cards Topps #2 Packs #7 Cards Each. Give them as a gift or keep them.

This listing is for one New Unopened Sealed In Pack:

The Topps Co. was a select licensee who released official merchandise before the summer 2008 Indiana Jones movie.  Notably, the company’s Indiana Jones Heritage cards were available exclusively in hobby and specialty markets.   Mass retail stores did not have them.

The card imagery featured 90 memorable scenes from all 3 original movies.  Card designs pay homage to the ”Raiders of the Lost Ark” cards.  Topps 1st published these cards in 1981.  Indeed, the retro-inspired Heritage branding and packaging is sure to resonate with many collectors.

Further, well-known illustrators were on board to contribute original unique Indiana Jones sketch cards.  In addition, sequentially-numbered parallel cards round out the random, insert card offerings.

Importantly, a fifth film is scheduled to be released in mid-2021.  In fact, the series was created by George Lucas, and its films are directed by Steven Spielberg and star Harrison Ford as the title character.  The Walt Disney Co. has owned the Indiana Jones intellectual property since it acquired Lucasfilm, the series’ production company, in 2012.

SECONDLY, DYE LOTS VARY.  SO COLORS MAY DIFFER FROM THOSE SHOWN.

Also, pics on pack you receive may vary from that shown.

Surely, buy this Topps Indiana Jones Movie Cards #2 Pack #& Cards Each New. Give them as a gift or keep them.

Surely, ask questions before buying to assure your complete satisfaction. 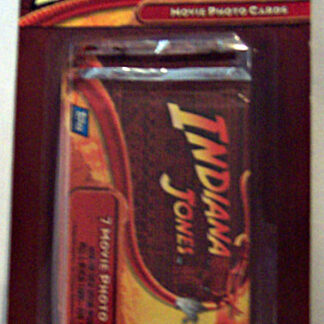