The Snowman And The Snowdog IOM Crown Commemorative Coin makes a great collectible numismatic gift for yourself or any coin collector.

The Snowman and The Snowdog

The Snowman and The Snowdog beautifully captures the magic and excitement of the original film as well as being a heart-warming story about love, loss and friendship.  When a young boy, Billy, moves to a new house, he discovers a secret box hidden under the floorboards.  In it are a hat, scarf, some lumps of coal and a shrivelled tangerine – a snowman-making kit! Later that day it snows and Billy builds a Snowman and, with a little spare snow, a Snowdog.  That night, at the stroke of midnight, The Snowman and The Snowdog magically come to life.  The boy awakes and joins them on an amazing adventure.

This IOM 2014 Crown Coin features these loveable characters from the film and shows The Snowman, The Snowdog and Billy flying high above the rooftops.

The back shows Queen Elizabeth II.

The Snowman And The Snowdog IOM Crown Commemorative Coin makes a great collectible numismatic gift for yourself or any coin collector. 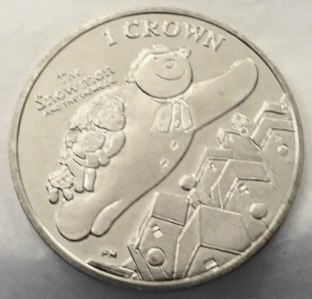 You're viewing: The Snowman and The Snowdog Isle Of Man 2014 Issue 1 Crown Legal Tender Copper-Nickel Coin Uncirculated $25.99
Add to cart
0