Marilyn Monroe 85th Anniversary Of The Birth Of A Screen Goddess

The photo you will receive in this set is an official licensed copy of Bruno Bernard’s iconic 1999 photo “Marilyn in White”.

This Marilyn Monroe Silver-Plated Commemorative Proof Coin and Official Photo Set makes a great collectible gift for yourself or any Marilyn Monroe and/or coin or photo collector.

This listing is for one uncirculated coin:

85th Anniversary Of The Birth Of a Screen Goddess

Along with the coin, you will receive an Official Licensed Bernard Of Hollywood Photo of Marilyn Monroe on the back of which is a brief biography of the iconic star.

Bruno Bernard (February 2, 1912 – June 3, 1987) also known as Bernard of Hollywood, was an American photographer best known for pin-up and glamour photography of Marilyn Monroe.   Bernard is credited with first photographing Monroe at the Racquet Club in Palm Springs, California, in 1947, when she was still Norma Jeane, who later became known as Marilyn Monroe and is said to have told Bernard, “Remember, Bernie, you started it all”.  In 1984, Bernard became the first still photographer to be honored by the Academy of Motion Picture Arts and Sciences with a 50-year retrospective of his work.  In 1999, his photo “Marilyn in White”, of Monroe in her wind-blown dress from the movie The Seven Year Itch (1955), was selected as the “Symbol of the Century” by the Museum of Modern Art in New York.  The same photograph was also chosen by the International Center of Photography as one of the “20 Unforgettable Photographs”.

The photo you will receive in this set is an official licensed copy of Bruno Bernard’s iconic 1999 photo “Marilyn in White”.

This captivating silver plated commemorative coin has been issued to mark the 85th anniversary of the birth of one of the most iconic screen goddesses the world has ever known – Marilyn Monroe!

Marilyn Monroe (June 1, 1926 – August 5, 1962) was already a legend during her lifetime.  Her life was the story of Cinderella – from an unknown girl to the idolized and adored megastar.  She grew up in humble circumstances and managed to achieve heights only few do.  She became so famous that, to this very day, more than 50 years after her death, she is still remembered.  It is said that the movie star received more fan post in the first years after her tragic death than many a Hollywood star did at that time.  Marilyn Monroe was an incredibly beautiful woman who was very expressive in her films and in photographs.

PHOTOS IN THIS LISTING ARE ENLARGED TO SHOW DETAILS.

COIN AND CAPSULE MAY SUPERFICIAL NICKS, SCRATCHES AND WEAR OF FINISH DUE TO HANDLING AND STACKING AT THE MINT.

COIN MAY HAVE SPOTTING, TONING, AND/OR OXIDATION RELATED TO AGE.

COIN YOU RECEIVE MAY VARY FROM THE ONE SHOWN IN PHOTO BUT WILL BE IN SAME GENERAL CONDITION.

PARDON REFLECTIONS IN PHOTOS DUE TO COIN BEING HIGHLY REFLECTIVE — YOU CAN SEE CAMERA LENS AND FINGERS REFLECTED ON COIN.

PHOTO OF MARILYN MONROE MAY HAVE MINOR SHELF WEAR AS SOLD NEW FROM THE MINT INCLUDING SMALL RIPS, TEARS,FOLDS AND/OR CREASES.

The back carries the effigy of Queen Elizabeth II together with inscriptions in the surround of “ELIZABETH II” the country “COOK ISLANDS” and the coin denomination “1 DOLLAR”.

This Marilyn Monroe Silver-Plated Commemorative Proof Coin and Official Photo Set makes a great collectible gift for yourself or any Marilyn Monroe and/or coin or photo collector. 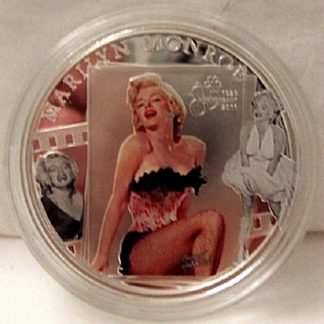