Firstly, each eraser is about 1.5 inches in diameter.
Importantly, this collectible item is Avengers Official Movie Merchandise!

Surely, these Marvel Avengers Movie Erasers New collectibles make a great gift for yourself or someone you know.

Firstly, each eraser is ~1.5″ in diameter.
Importantly, this collectible item is Avengers Official Movie Merchandise!
Also, TM & @ 2012 Marvel & Subs.
Further, Made in China.

The Avengers is a 2012 superhero film and the 6th film in the Marvel Cinematic Universe.  In fact, the heroes are from the superhero team the Avengers Stan Lee and Jack Kirby created.

The Avengers is the 1st major crossover in the Marvel Cinematic Universe.  Also, it is the 1st Walt Disney Pictures released.  Notably, the film was successful financially and critically. Besides, it broke box-office records as the biggest weekend opening for a film.  Most noteworthy, it is the fastest film to gross $1 billion worldwide.  Further, the film is statistically the most successful film Disney released to date.  Indeed, many regard it as one of the greatest superhero films ever.  Importantly, the film got a nomination for the Oscar for Best Visual Effects.

In addition, erasers as sold new have minor scuff marks and uneven paint.

Next, colors and details of items and pack you get may vary as lots vary.

Noteworthy, may contain small parts, choking hazards, toxins.  Thus, it is not for kids < 8 years old.

Surely, buy these Marvel Avengers Movie Erasers New for yourself.  Or give them to someone you know. 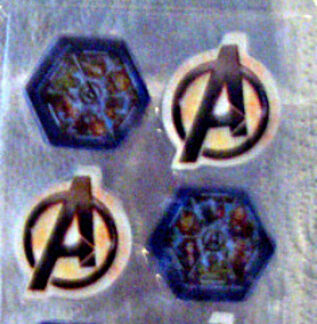