Pin-on-pin design.  Indeed, the banner at the bottom is raised and the little Mickey at the top is a spinner.  Goofy, Daisy, Minnie, and Clarabelle are tossing Bandleader Mickey in the air!  Also, hats and confetti are in the air.

Buy this Disney Mickey Mouse Club 60th Anniversary Limited Release Pin New On Card  to collect yourself.  Or give it to someone you know!

Surely, celebrate the 60th anniversary of the Mickey Mouse Club with this limited release pin!  Notably, pin-on-pin design.  Indeed, the banner at the bottom is raised and the little Mickey at the top is a spinner. Disneyland and Walt Disney World released this pin on September 3, 2015.

This pin has 5 characters:
1-Mickey Mouse is shown twice: his face is in the center and he is the bandleader on top (spinner)
2-Goofy
3-Daisy
4-Minnie Mouse
5-Clarabelle

Goofy, Daisy, Minnie, and Clarabelle are tossing Bandleader Mickey in the air!  Also, hats and confetti are in the air.

“The Mickey Mouse Club” first premiered on October 3, 1955.  In fact, the enduring variety show tends to be associated with the numerous ‘90s pop stars it spawned in its third iteration, including Britney Spears, Christina Aguilera and Justin Timberlake.

Noteworthy, Disney sells these items as new with minor imperfections.  Back of pin my have spotting, toning, discoloration, and/or oxidation.

Buy this Disney Mickey Mouse Club 60th Anniversary Limited Release Pin New On Card  to collect yourself.  Or give it to someone you know! 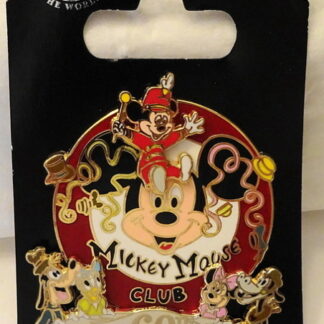