This Paul Brent Beachscape Magnetic Listpad #60 Sheets New makes a great collectible gift for yourself and/or someone you know!

This listing is for one New Sealed In Pack:

Paul Brent is a Panama City artist whose work is known worldwide.  He completed his Bachelor of Architecture degree in 1968 and following graduation he joined the Air Force where, after training, he was stationed at Tyndall Air Force Base in Panama City in 1969.  His paintings in watercolor and oil have deftly portrayed the many aspects of the area capturing the innate beauty on paper and canvas.  Often he is referred to as America’s best know coastal artist and he is best known for his idyllic watercolors of coastal life.

He began to paint scenic coastal landscapes and seascapes and was chosen of one of only two official artists to portray the new town of Seaside Florida when it began to be built.  His work of early Seaside became well known as he entered the print publishing business in 1986.  Sailboats, fishing boats then followed by landscapes and wildlife of the Southwest, hot air balloons, flowers and garden scenes were all subjects he portrayed through the early 90’s.  In the later 90’s he began to surround his inner images with decorative borders that would relate to his licensed work and he continued with many of the same subject that he had worked with in the past as well as visit other coastal areas around the U.S. as  well  as the Caribbean.

In a recent trade publication advertisement Paul Brent used the quote “one artist many visions” and a retrospective of his professional work would validate the claim.

Photos are enlarged to show details.

Color of item you receive may differ somewhat from that shown as dye lots vary.

This Paul Brent Beachscape Magnetic Listpad #60 Sheets New makes a great collectible gift for yourself and/or someone you know! 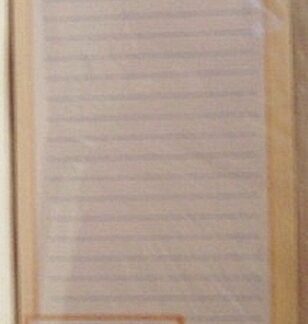