Surely, get this Disney Pirates Of The Caribbean Blackbeard Figure New for yourself.  Or give it to someone!

Background For Pirates of the Caribbean On Stranger Tides:

Johnny Depp returns to his iconic role of Captain Jack Sparrow in an action-packed adventure.  Crossing paths with the enigmatic Angelica (Penélope Cruz), he’s not sure if it’s love—or if she’s a ruthless con artist who’s using him to find the fabled Fountain of Youth.  When she forces him aboard the Queen Anne’s Revenge the ship of the legendary pirate Blackbeard (Ian McShane), Jack finds himself on an unexpected adventure in which he doesn’t know whom to fear more: Blackbeard or Angelica, with whom he shares a mysterious past.

Further, contents may vary in style, color, shape, and decoration from images shown on package or in advertising..

Also, pack may have minor shelf wear as sold by Disney.   This includes rips, tears, folds, and/or creases.

Next, batteries included (3 x 1.5V LR41/AG3 Button Cell) may not work.  So replace them immediately.

Noteworthy, not for children under 8 years.

Surely, get this Disney Pirates Of The Caribbean Blackbeard Figure New for yourself.  Or give it to someone!

Please be sure to read this listing carefully.  Also, ask questions before buying so you are completely satisfied with your purchase. This listing includes free shipping to USA.  In addition, ships by USPS First Class Mail with delivery confirmation. 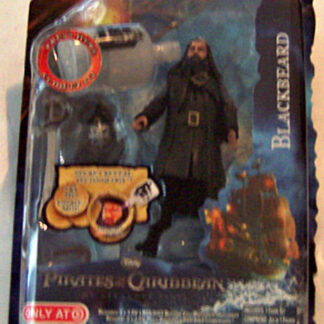