Definitely, read product description and disclaimers prior to purchase.

Surely, this  Disney Pixar Films 2011 Calendar is a great gift for yourself.  Or give it to someone else.

Pixar is an computer animation film studio.  It is based in California.  Notably, it is a subsidiary of Walt Disney Studios.  In addition, Pixar began in 1979 as part of the Lucasfilm computer division.  Next, it spun-out as a corporation in 1986, with funding by Steve Jobs, who became the major shareholder.  Later, in 2006, Disney bought Pixar by turning each share of Pixar stock to 2.3 shares of Disney stock.  Importantly, this transaction resulted in Jobs becoming Disney’s largest single shareholder at the time.  Of course, Pixar is best known for CGI-animated feature films with high-quality images.

Pixar has produced 20 feature films.  Firstly, Pixar produced Toy Story (1995).  Importantly, this was the first-ever computer-animated feature film.  In fact, its most recent film was Incredibles 2 (2018).  Noteworthy, all of the studio’s films have debuted with great audience receptions.

Also, color and materials of item you receive may vary due to different lots.

DEFINTELY, NOT FOR CHILDREN UNDER 10.

Surely, this  Disney Pixar Films 2011 Calendar is a great gift for yourself.  Or give it to someone else.

Our supply is extremely limited.

Ask questions before buying so you are completely satisfied with your purchase. 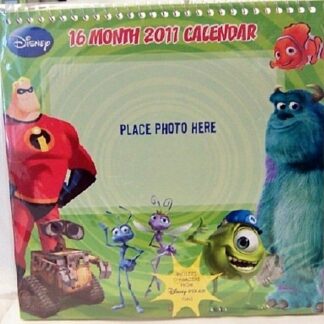