Playbill From The 2002 Broadway Production Of Disney’s Beauty and the Beast Gently Used.

This Playbill From The 2002 Broadway Production Of Disney’s Beauty and the Beast Gently Used makes a great Broadway musical entertainment memorabilia collectible gift.

Playbill
The 2002 Broadway Production
Of Disney’s Beauty and the Beast.

Background Info For Disney’s Beauty and the Beast:

Beauty And The Beast was Disney Theatrical Productions’ first Broadway musical. It ended its thirteen year run on Broadway on 29 Jul 2007. When the musical closed, it had played 56 previews and 5,464 performances, making it the sixth longest running show in Broadway history.

Disclaimers For This Playbill Beauty Beast 2002:

FURTHER, PAGES MAY HAVE MINOR SHELF WEAR INCLUDING RIPS, TEARS, CREASES, DENTS AND/OR BENDS. RIPS MAY BE TAPED.

This Playbill From The 2002 Broadway Production Of Disney’s Beauty and the Beast Gently Used makes a great Broadway musical entertainment memorabilia collectible gift. 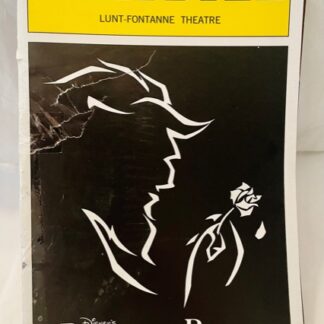