Autographed on cover by Maureen McCormick and someone with illegible signature.

Also autographed inside by Mimi Hines (of Funny Girl on Broadway) over her phot on cast pictures page.

Autographed on cover by Maureen McCormick and someone with illegible signature.

Also autographed inside by Mimi Hines (of Funny Girl on Broadway) over her phot on cast pictures page.

This revival of Grease, directed by Jeff Calhoun, opened May 11, 1994, at the Eugene O’Neill Theatre. The production was nominated for three Tony Awards for Best Revival of a Musical, Best Featured Actress, and Best Choreography. After 1,505 performances, Grease closed on January 25, 1998.

Grease is a 1971 musical by Jim Jacobs and Warren Casey. Named after the 1950s United States working-class youth subculture known as greasers, the musical is set in 1959 at fictional Rydell High School. Rydell High is based on William Howard Taft School in Chicago, Illinois and named after rock singer Bobby Rydell. Grease follows ten working-class teenagers as they navigate the complexities of peer pressure, politics, personal core values, and love. The score borrows heavily from the sounds of early rock and roll. In its original production in Chicago, Grease was a raunchy, raw, aggressive, vulgar show. Subsequent productions sanitized it and toned it down.

The show mentions social issues such as teenage pregnancy, peer pressure and gang violence; its themes include love, friendship, teenage rebellion, sexual exploration during adolescence, and, to some extent, class consciousness and class conflict. Jacobs described the show’s basic plot as a subversion of common tropes of 1950s cinema, since the female lead, who in many 1950s films transformed the alpha male into a more sensitive and sympathetic character, is instead drawn into the man’s influence and transforms into his wild, roguish fantasy.

Grease was first performed in 1971 in the original Kingston Mines nightclub in Chicago (since demolished). From there, it has been successful on both stage and screen, but the content has been diluted and its teenage characters have become less Chicago habitués (the characters’ Polish-American backgrounds in particular are ignored with last names often changed, although two Italian-American characters are left identifiably ethnic) and more generic. At the time that it closed in 1980, Grease’s 3,388-performance run was the longest yet in Broadway history, although it was surpassed by A Chorus Line on September 29, 1983.

It went on to become a West End hit, a successful feature film, two popular Broadway revivals in 1994 and 2007, and a staple of regional theatre, summer stock, community theatre, and high school and middle school drama groups. It remains Broadway’s 16th longest-running show.

Maureen Denise McCormick (born August 5, 1956) is an American actress, singer and author. She portrayed Marcia Brady on the ABC television sitcom The Brady Bunch, which ran from 1969 to 1974, and reprised the role in several of the numerous Brady Bunch spin-offs and films, including The Brady Kids, The Brady Bunch Hour, The Brady Brides and A Very Brady Christmas (1988). McCormick has appeared in The Amanda Show as Moody’s mom in the Moody’s Point segment. McCormick also appeared in The Idolmaker (1980) as well as a wide range of other supporting film roles. In the 1980s and 1990s, she ventured into stage acting, appearing in a variety of different roles and productions such as Wendy Darling in Peter Pan and Betty Rizzo in Grease.

McCormick also had a brief career as a recording artist, releasing four studio albums with the Brady Bunch cast as well as touring with them. Her only release as a solo artist to date is a country music album, When You Get a Little Lonely (1995).

Despite professional success on The Brady Bunch and its spin-offs, McCormick struggled in her personal life in the years following the original series’ end. Addictions to cocaine and quaaludes, as well as bouts of depression and bulimia, all contributed to McCormick losing her reputation for reliability as an actress. Since the 2000s, she has appeared on several reality television series such as VH1’s Celebrity Fit Club, CMT’s Gone Country (which led to a short-lived spin-off series led by McCormick, Outsiders Inn) and the Australian version of I’m a Celebrity… Get Me Out of Here!, as well as guest spots on a wide range of television series. In 2008, McCormick published an autobiography, Here’s the Story: Surviving Marcia Brady and Finding My True Voice, which debuted at number four on The New York Times bestseller list.

Disclaimers For This Playbill Grease Autographed 1994: 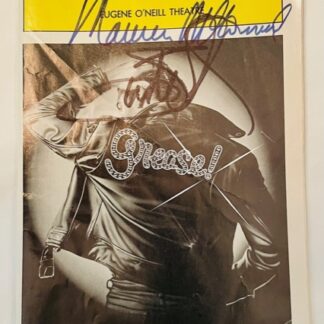