Playbill From The May 2002 Broadway Production Of Rogers & Hammerstein’s Oklahoma Gently Used.

Oklahoma! is the first musical that the duo of Rodgers and Hammerstein wrote. The musical is based on Lynn Riggs’ 1931 play, Green Grow the Lilacs. Set in farm country outside the town of Claremore, Indian Territory, in 1906, it tells the story of farm girl Laurey Williams and her courtship by two rival suitors. Cowboy Curly McLain The sinister and frightening farmhand Jud Fry rivals Cowboy Curly McLain for Laurey’s heart. A secondary romance concerns cowboy Will Parker and his flirtatious fiancée, Ado Annie.

The original Broadway production opened on March 31, 1943. It was a box office hit and ran for an unprecedented 2,212 performances. Later, Oklahoma enjoyed award-winning revivals, national tours, foreign productions and an Oscar-winning 1955 film adaptation. School and community productions have long considered it a popular choice. Rodgers and Hammerstein won a special Pulitzer Prize for Oklahoma! in 1944.

This musical builds on the innovations of the earlier Show Boat. It epitomized the development of the “book musical”, a musical play where the songs and dances are fully integrated into a well-made story. Furthermore the “book musical” manifests serious dramatic goals and is able to evoke genuine emotions other than amusement. In addition, Oklahoma! features musical themes, or motifs, that recur throughout the work to connect the music and story. A fifteen-minute “dream ballet” reflects Laurey’s struggle with her feelings about two men, Curly and Jud.

Disclaimers For This Playbill Oklahoma May 2002: 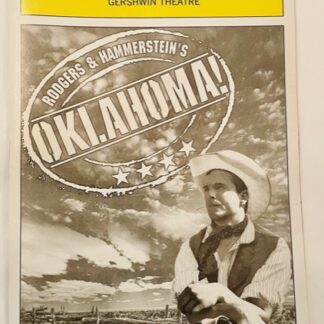