This listing is for one new sealed:

Surely, witness the animated effects as you open the lenticular lid of the Kairu Tin!

Firstly, @2011 Spin Master Ltd.
Importantly, Spin Master Makes These Cards In USA.
Moreover The Rest is Made In China And Assembled In China.

The game of Redakai has two sets of rules, a set of “Basic rules” which plays much like a simple card game where you flip the top card of a deck face-up to compare powers and another set of rules that utilize the full text on the cards.  Notably, Spin Master makes the cards from plastic instead of paper and uses a system where several parts of the cards are clear to allow portions of the cards behind them to show.  Also, the cards use images created with lenticular printing.

There are three types of cards: Characters, Monsters, and Attacks.  Importantly, each player starts the game with three Characters.  Indeed, a player plays monsters on their own characters to change their abilities and defenses and play attacks on top of their opponent’s characters in order to damage them.  In fact, when the three yellow “health bars” on a character are filled in red, that character is knocked out.  Notably, one must “KO” all three opposing characters to win the game.  The game’s power source, “Kairu”, is how the cards are played in the full game.

Finally, Spin Mater released the card game to hobby stores in June 2011 and generally released it in August of that same year.

Further, tin and contents may have minor shelf wear as sold new.

Next, colors and details of tin and contents you get may vary as lots vary.

Noteworthy, may contain small parts, choking hazards, sharps, and toxins.  Thus, it is not for kids < 8 years old. 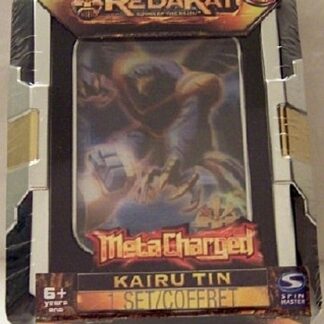