Certainly, buy this Secrets Code Mini Book New.  Surely, get it as a great gift for yourself.  Or give it to someone you know as a unique gift or stocking stuffer.

This listing is for one New:

SECRETS OF THE CODE.
THE UNAUTHORIZED GUIDE TO THE MYSTERIES BEHIND THE DA VINCI CODE.
2005 EDITION
MINI BOOK
EDITED BY DAN BURSTEIN

Product Description:Dan Brown’s bestselling novel, The Da Vinci Code, has captivated the imagination of millions of readers.  In fact, its provocative story and rich historical background has spurred wide interest in the author’s source materials.  However, the novel has aroused controversies, both public and private, all over America.  Thus, readers everywhere want to know what is fact and what is fiction.  Therefore, in this mini edition of Secrets of the Code: The Unauthorized Guide to the Mysteries Behind The Da Vinci Code, Dan Burstein helps readers sort out fact, informed speculation, and fiction.  Most noteworthy, readers will get a definitive guide to the novel and its the major themes.

About the Author:Dan Burstein is an award-winning journalist and best-selling author of 6 prior books.  Noteworthy, his subjects range from China to Japan to the digital technology revolution.  Further, he is founder of Millennium Technology Ventures.  In addition, Burstein has often written about the mysteries and complexities of the future.  Notably, this is his first book that focuses on mysteries of the past.

The Da Vinci Code is a 2003 mystery thriller novel by Dan Brown.  Further, it follows “symbologist” Robert Langdon and cryptologist Sophie Neveu.  Moreover, a murder in the Louvre Museum in Paris causes them to become involved in a battle between the Priory of Sion and Opus Dei.  In fact, this battle is over the nature of the relationship between Jesus Christ and Mary Magdalene.

Significantly, the title of the novel refers to the finding of the first murder victim in the Grand Gallery of the Louvre.   Actually, this victim was found naked and posed similar to Leonardo da Vinci’s famous drawing, the Vitruvian Man.  Moreover, a mathematical message is written beside his body and a pentagram drawn on his chest in his own blood.

The novel explores an alternative religious history. In fact,  its central plot point is that the Merovingian kings of France were descended from the bloodline of Jesus Christ and Mary Magdalene.  Importantly, you can find these ideas in Clive Prince’s The Templar Revelation (1997) and books by Margaret Starbird.  Also, the book refers to The Holy Blood and the Holy Grail (1982) though Dan Brown has stated that it was not used as research material.

The Da Vinci Code provoked a popular interest in speculation concerning the Holy Grail legend and Mary Magdalene’s role in the history of Christianity.  However, many Christian denominations have denounced it as an attack on the Roman Catholic Church and criticized it for historical and scientific inaccuracies.

The novel nonetheless became a worldwide bestseller that sold 80 million copies as of 2009.  It has been translated into 44 languages.

SECONDLY, DYE LOTS VARY.  SO COLORS MAY DIFFER FROM SHOWN.

Certainly, buy this Secrets Code Mini Book New.  Surely, get it as a great gift for yourself.  Or give it to someone you know as a unique gift or stocking stuffer.

SO TO AVOID DISAPPOINTMENT,

Please be sure to ask questions before buying to assure your complete satisfaction with your purchase. 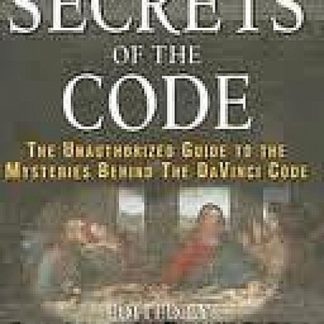