Buy this Disney Sleeping Beauty Aurora Cameo LE Pin New  to collect yourself.  Or give it to someone you know!

Sleeping Beauty originally failed to ear enough to cover the huge cost of the film.  Also, it received mixed critical reception.  Therefore, Walt Disney lost interest in the animation medium.  However, the subsequent re-releases proved hugely successful.  Critics and audiences have since hailed Sleeping Beauty as an animated classic.

Here is the plot.  Filled with jealousy, the evil witch Maleficent curses Princess Aurora to die on her 16th birthday.  Thanks to Aurora’s guardian fairies, she only falls into a deep sleep.  Thus she becomes Sleeping Beauty.  Her deep sleep can only be ended with true love’s kiss.  To prevent Phillip from rescuing Aurora, Maleficent imprisons him.  The good fairies are the last hope to free Phillip so that he can awaken Aurora.

Noteworthy, Disney sells these items as new with minor imperfections.   Flaws include color background of cameo is not uniform.

Noteworthy, not a true locket, see photos.  How much hinge opens varies from 40 to 180 degrees.

Furthermore, pin may have minor nicks and scratches as sold new at Disney.  May have tarnish and/or oxidation of finish on back, and irregularities of pin backs.

MOST IMPORTANTLY, WARNING: CHOKING HAZARD – Small parts and made in China.  Thus danger to children!!!

Buy this Disney Sleeping Beauty Aurora Cameo LE Pin New  to collect yourself.  Or give it to someone you know!

Please be sure to read this listing carefully.  And ask questions before buying so you are completely satisfied if you buy. This listing includes free shipping to USA.  Ships by USPS First Class Mail with delivery confirmation. 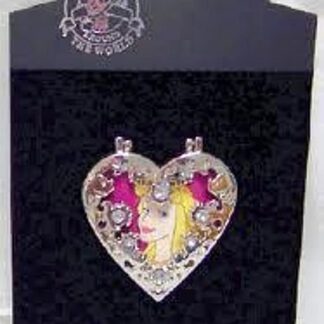