Sorcerer Mickey Mouse is the Sorcerer’s Apprentice from Fantasia, wearing his special hat and standing between two dancing brooms.

Buy this Disney Sorcerer Mickey Mouse Jumbo LE 500 Pin New On Card  to collect yourself.  Or give it to someone you know!

This listing is NOT for the Proof version of this pin.

FURTHER, PIN TRADING AROUND THE WORLD.

IN ADDITION, HAS #2 POSTS WITH #2 MICKEY PIN BACKS.

Mickey Mouse is an animated character that Walt Disney and Ub Iwerks created in 1928.  He is an anthropomorphic mouse.   Notably, he is a cheerful optimist with an adventurous and mischievous streak.  Estimated as standing 2′ 3″ (69 centimeters) and weighing 23 pounds (10 kilograms), Mickey is easily identified by his round ears, red shorts, falsetto voice, white gloves and cartoonishly large yellow shoes.

Buy this Disney Sorcerer Mickey Mouse Jumbo LE 500 Pin New On Card  to collect yourself.  Or give it to someone you know! 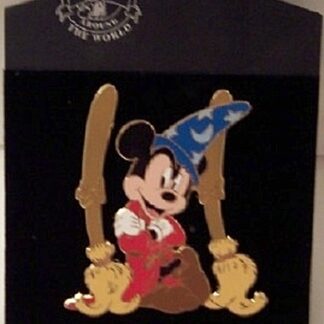