The front of this magnificent coin depicts the Basilica of St. Peter in the center with St. Peter, Pope Julius II and Michaelangelo.

The Sierra Leone Coat of Arms is on the back.

Own or gift this wonderful coin issue as a commemoration of 500 years since the laying of the foundation stone of St. Peter’s Basilica and as a celebration of His Holiness Pope Benedict XVI.

Own this highly collectible coin of religious significance!!!!

Proudly own this highly collectible coin!!!!

A memorial was first introduced by Constantine the Great on the site where St Peter is said to have been buried after he was executed in 67AD.

On April 11, 1506 Pope Julius II laid the Foundation Stone for a new church to be built in the Vatican city on the site where St. Peter was said to have been buried.

The elderly pontiff descended deep in to the earth on a wobbly rope ladder to perform the honour. Due to the lack of funds, construction was slow. Pope Leo X replaced Pope Julius II in 1513. After the original architect Bramante died in 1514, Pope Leo X made Raphael the chief architect.

Raphael never finished the project and over time Sangello, Verone and Puruzzi also served as architects until Michaelangelo was put in charge but he was then in his seventies and only witnessed the completion of the shell of the famous Dome by the time that he died in 1564.

The Cathedral was not completed until 1626, 120 years after Julius II had laid the first stone.

Carlos Maderna completed the facade. Bernini designed the Colonnade and the 140 saints that adorn the top of the Colonnade were sculpted by his students.

The front of this magnificent coin depicts the Basilica of St. Peter in the center with St. Peter, Pope Julius II and Michaelangelo; Pope Benedict XVI, the Archangel Michael who is revered in Catholic tradition as the protector of the Church and the Archangel Gabriel who is seen as the bearer of good tidings and as the comforter and the helper of men are also featured.

On the 19th of April 2005, Cardinal Joseph Ratzinger of Bavaria, stepped out onto the Vatican balcony to address the pilgrims beneath as Pope Benedict XVI.  The 265th pontiff, the first German pontiff in 1,000 years, described himself to the crowds that were amassed in the square as ‘a simple, humble worker in the Lord’s vineyard’.

The Catholic Church in Sierra Leone has approximately 150,000 members and has played a great part in the charitable work that has been desperately needed since peace spread through the county, a peace that Pope John Paul II helped to bring about by personally appealing to the rebels to cease their activities.

The Sierra Leone Coat of Arms is on the back.

COIN MAY HAVE SUPERFICIAL NICKS, SCRATCHES, WEAR OF FINISH AND STACKING MARKS FROM THE MINT.

COIN YOU RECEIVE MAY DIFFER FROM THAT SHOWN IN PHOTO BUT WILL BE IN SAME GENERAL CONDITION.

Own or gift this wonderful coin issue as a commemoration of 500 years since the laying of the foundation stone of St. Peter’s Basilica and as a celebration of His Holiness Pope Benedict XVI. 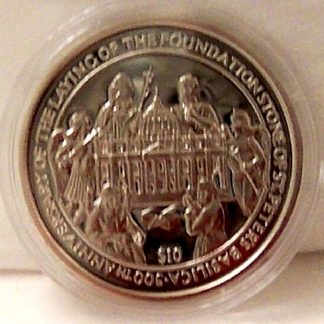