This Star Wars Rebels Playing Cards In Collectible Tin New Sealed makes a great entertainment memorabilia collectible gift for yourself or someone you know!

This listing is for one BRAND NEW SEALED:

Star Wars Rebels is an animated television series set during the time frame between the films Star Wars: Episode III Revenge of the Sith and Star Wars: Episode IV A New Hope. It premiered worldwide as a one-hour television movie, Star Wars Rebels: Spark of Rebellion, on Disney Channel on October 3, 2014; Regular episodes aired for four seasons on Disney XD, from October 13, 2014 to March 5, 2018. During its run, the series received nominations for four Emmy Awards, including two consecutive nominations for “Outstanding Children’s Program.”

The series follows a motley group of rebels who live aboard the starship Ghost as they fight against the evil Galactic Empire. The rebels include Ezra Bridger, a young orphan from Lothal who learns he can use the Force; Kanan Jarrus, a Jedi who survived Order 66; Hera Syndulla, a Twi’lek pilot and veteran resistance fighter; Sabine Wren, a Mandalorian explosives expert; Garazeb “Zeb” Orrelios, a Lasat warrior; and the cantankerous astromech droid C1-10P, also known as Chopper. The crew will eventually help give rise to the Rebel Alliance.

WE ENLARGED PHOTOS TO SHOW DETAILS.

ITEM YOU GET MAY DIFFER SOMEWHAT RE COLOR, ARTWORK  & SHELF WEAR BUT WILL BE IN SAME GENERAL CONDITION.

PACKAGE MAY HAVE MINOR SHELF WEAR AS SOLD NEW.

NOT FOR CHILDREN UNDER 8 Y.O.

New in factory sealed package but package may have minor shelf wear.

FUN FOR THE WHOLE FAMILY!

This Star Wars Rebels Playing Cards In Collectible Tin New Sealed makes a great entertainment memorabilia collectible gift for yourself or someone you know! 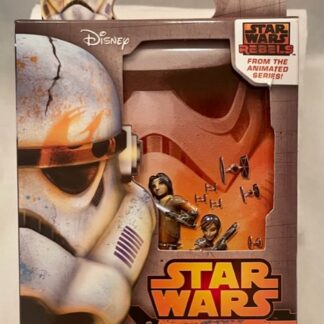