This pack contains #1 figures: Gargamel.
Figure is about 3 inches high.
Jakks Pacific manufactured these figures in 2011.

This The Surfs Gargamel Figure Grab ‘Ems New collectible makes a great gift for yourself.  Or someone you know.

This pack contains #1 figure: Gargamel.
Figure is about 3 inches high.
Jakks Pacific manufactured these figures in 2011.

Gargamel is the main antagonist who, along with his cat Azrael, and later with a young apprentice named Scruple, continued to plot against the Smurfs in order to capture and/or eliminate them. He was accountable for the creation of Smurfette, who was changed into a real Smurf by Papa Smurf. Gargamel is a loathsome individual who is prepared to commit many sinister and cruel acts to achieve his goals and he can be downright ruthless on occasion, such as enjoying the time to torment the Smurfs, threatening to burn Puppy alive, and even attempt to harm the defenseless Baby Smurf.

First, we enlarge photos in this listing to show details.

Next, pack may have minor shelf wear as sold new.

Further, these figures as sold new have minor scuff marks and uneven paint.

Moreover, colors of figure and pack you receive may vary from that shown as dye lots vary.

This listing is for only one pack of 1 Smurf Figure, Gargamel.

This The Surfs Gargamel Figure Grab ‘Ems New collectible makes a great gift for yourself.  Or someone you know. 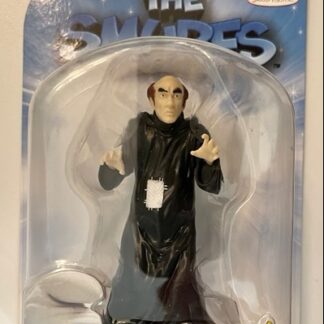