The reverse (tails) design is emblematic of the theme “The Star-Spangled Banner” (the flag).  It depicts a waving modern American flag.  Inscriptions are ONE DOLLAR, E PLURIBUS UNUM and UNITED STATES OF AMERICA.

This listing is for one uncirculated new in box:

On September 7, 1814, Francis Scott Key visited the British fleet in Maryland’s Chesapeake Bay to secure the release of his friend Dr. William Beanes.  The elderly physician had been taken prisoner when the British invaded Washington, setting fire to several government buildings, including the U.S. Capitol, White House and Treasury Department.

Beanes’ release was secured, but he and Key were held by the British during the shelling of Fort McHenry, the principal fort defending Baltimore.  On the morning of September 14, 1814, after the 25-hour British bombardment of Fort McHenry, Key peered through the clearing smoke to see a 42-foot by 30-foot American flag flying proudly over it.

He was so inspired by the sight of the enormous flag that he wrote a verse he named “The Defence of Fort McHenry” to commemorate the occasion.  He also included a note that it should be sung to the tune of the popular British melody “To Anacreon in Heaven.”  Within a month, the words had been published in papers along the eastern seaboard.

The Star-Spangled Banner Commemorative Coin Act (Public Law 111-232), signed into law on August 16, 2010, requires the Secretary of the Treasury to mint and issue up to 100,000 gold $5 coins and 500,000 silver $1 coins in commemoration of the bicentennial of the writing of our national anthem.  According to the law, the designs shall be emblematic of the War of 1812, particularly the Battle of Baltimore that formed the basis for the lyrics of “The Star—Spangled Banner.”

These 2012 Star-Spangled Banner Commemorative Coin designs were approved by the Department of the Treasury on November 3, 2011, at the recommendation of the United States Mint, after consultation with the Maryland War of 1812 Bicentennial Commission and the U.S. Commission of Fine Arts, as well as review by the Citizens Coinage Advisory Committee.

Surcharges collected from sales of the 2012 Star-Spangled Banner Commemorative Coins— $35 for each gold coin and $10 for each silver coin—are authorized to be paid to the Maryland War of 1812 Bicentennial Commission.  The commission will use these funds to support its bicentennial activities, educational outreach, and preservation and improvement of the sites and structures related to the War of 1812.

This listing is for one of these coins only, the proof silver dollar version.

A proof coin has a brilliant mirror-like finish.  The term “proof” refers to a specialized minting process, which begins by manually feeding burnished coin planchets into presses fitted with specially polished dies.  The US mint uses the term “uncirculated” to refer to a coin that has a high quality, satin finish and is produced with special care.  In this listing the term uncirculated means that the coin came from the Mint directly to us and has never been circulated.

The one-dollar silver coin has a mintage limit of up to 500,000 across all product options.

THERE MAY BE SOME DISCOLORATION, TONING AND/OR SPOTTING OF COIN, SLEEVE AND BOXES.

COIN, SLEEVE AND BOXES MAY HAVE SUPERFICIAL NICKS, SCRATCHES, WEAR OF FINISH AND STACKING MARKS FROM THE MINT.

The reverse (tails) design is emblematic of the theme “The Star-Spangled Banner” (the flag).  It depicts a waving modern American flag.  Inscriptions are ONE DOLLAR, E PLURIBUS UNUM and UNITED STATES OF AMERICA. 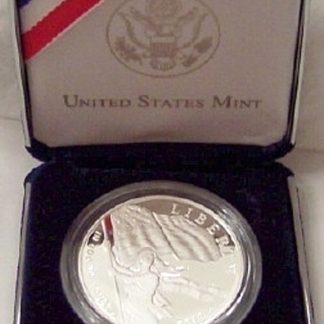