This coin features four aircraft which played a major part in aviation history from 1903 to 1919.

This is a coin that will be treasured by coin collectors, air travel enthusiasts, and anyone who loves the history of flight.

OWN THIS TRIBUTE TO THE FIRST MAJOR MILESTONE IN AVIATION HISTORY

Don’t miss your chance to own a piece of aviation history!

Description:
To celebrate this Centenary of Powered Flight, the Isle of Man Government approved the release of two superb crowns which portray the evolution of flight from 1903, through the intervening years to the present day.
Over a century ago, a flimsy flying machine – designed, built and flown by the remarkable Wright Brothers clawed its way into the air above the sands of North Carolina for the first twelve seconds and 120 feet of powered flight. From Fragile contraptions of wood, canvas and string, the airplane would swiftly develop into ever larger, faster, sleeker machines. The Isle of Man has marked this pivotal moment in aviation history with two magnificent coins, one of which is the one in this listing.

This coin features four aircraft which played a major part in aviation history from 1903 to 1919.

Great addition for your coin collection as well as a great tribute to Aviation and The Wright Brothers.  This 100th Anniversary Of Powered Flight Isle Of Man Commemorative Coin makes a great collectible numismatic gift for yourself or any coin collector. 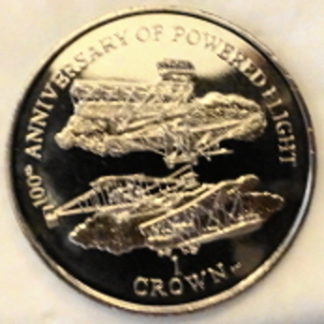