This coin shows an iconic image of Snoopy and the two things for which he is most renowned… laying on top of his doghouse and his best friend, a bird called Woodstock.

Over the last 60 years, Snoopy has been featured in numerous films, animated series and merchandise as well as the comic strip where it all started.

This Peanuts Commemorative Coin is an impressive silver dollar size and a makes a great gift for any Peanuts fan or coin collector.

This Peanuts Commemorative Coin is an impressive silver dollar size and a makes a great gift for any Peanuts fan or coin collector.

Commemorate the 50th anniversary of Charles Shultz’s famous Peanuts comic strip with this 2000 dated One Dollar coin from Niue.

The front of this coin shows Snoopy and Woodstock sitting on Snoopy’s dog house.

A beautiful portrait of Queen Elizabeth II is on the back.

Background Info For Peanuts and Snoopy:

The character of Snoopy first appeared in Charles Schulz’s Sunday comic strip in October 1950 and he is now one of the most famous cartoon characters in the world. Many fans love and adore him. Snoopy was a silent character in the comic strips until 1952, when his opinions manifested through a thought balloon.

By the 1960s, most of the comic strips focus upon Snoopy and we see him grow from being a puppy to a fully functioning adult dog… with extras. We see Snoopy walking on his hind legs, using a typewriter, and reading a book. In addition, he also adapts many personas including a pilot and an astronaut — he even has an alter-ego, a college student called ‘Cool Joe’ who wears sunglasses.

However, we know Snoopy most for two things… laying on top of his doghouse and his best friend, a bird called Woodstock.. Over the last 60 years, this iconic character has shown up in numerous films, animated series and merchandise as well as the comic strip where it all started.

The work of Charles Schulz is “the most shining example of the American success story,” whereas his character, Charlie Brown is an example of, “the great American un-success story” in that he fails in practically everything he does which makes him such a likable character.

Niue is a small island nation in the South Pacific. It was named Savage Island by Captain James Cook, who landed there in 1774, because of the hostility of the natives. Missionaries began arriving in the 1830’s and eventually converted the population to Christianity. The island has a population of only about 2200. Its main sources of income are the export of Bananas, copra, handicrafts and selling coins to collectors.

Next, pardon glare and reflections in photos.

Notably, coin you receive may vary somewhat from that shown but will be in same general condition.

Moreover, coin may have superficial scratches and/or minor wear of finish and/or nicks from way these coins are stacked at the mint.

Further, coin may have minor spotting and/or toning and/or oxidation.

This commemorative coin makes a great collectible gift for yourself or any Peanuts collector. 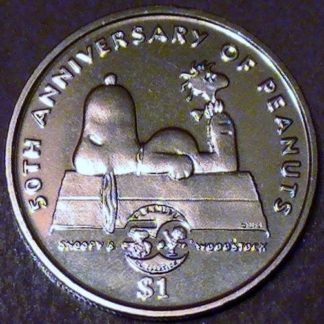