The front of this coin shows an image of the first 5c US postage stamp with a portrait of Benjamin Franklin.

Approved by Buckingham Palace, the back of the coin bears a fine effigy of Her Majesty Queen Elizabeth II by Ian Rank-Broadley FRBS.

This Benjamin Franklin Commemorative Titanium Proof Coin makes a great collectible gift for yourself or any coin, stamp, or American History collector.

OWN THIS LIMITED MINTAGE PROOF COIN WHICH HONORS ONE OF THE FIRST US POSTAGE STAMPS!!!

This listing is for one UNCIRCULATED:

NEW IN BOX WITH CERTIFICATE OF AUTHENTICITY

Note stock photo is to show details and are lighter than the actual coin in person.

Photos are enlarged to show detail.

Coin came from mint with superficial scratches on the capsule.

Coin may have minor spotting and/or toning and/or oxidation.

Coin comes with numbered Certificate of Issue but number on certificate you receive may differ from that shown in photo.

In 1847, just seven years after the release of the Penny Black, the world’s first postage stamp, the United Government approved the release of two stamps valued at 5c and 10c.  160 years later, in 2007, these two much sought after stamps were reproduced in the finest detail by Pobjoy Mint Ltd. on behalf of the Government of the British Virgin Islands.  Pobjoy manufactured the coin in this listing to honor the first US 5c stamp, which showed Benjamin Franklin, with special techniques used in coloring metal to produce this coin in Brown Titanium.

Historical Background:
A critical need to modernize the expanding nation’s postal service prompted the United States to issue its first postage stamps in 1847. Patrons and postal officials alike recognized the need for the U.S. government to issue stamps that could be used throughout the country and among nations. Leading the way, in 1840 Great Britain had issued the world’s first prepaid postage stamp, a 1-penny portrait of Queen Victoria known as the “Penny Black,” which eliminated payment by the recipient. The first United States general issue postage stamps, stamps for distribution throughout the country, were prepared under authorization of the Congressional Act of March 3, 1847.

Rawdon, Wright, Hatch & Edson, a banknote engraving firm, prepared the essays (or trial designs for the proposed postage stamp) for the first United States general issue of postage stamps.  Postmaster General Cave Johnson initially instructed the firm to use a portrait of recently deceased President Andrew Jackson on the 5-cent stamp and George Washington on the 10-cent denomination.  However, the essay, drawn in india ink and pencil, showed that Jackson had been replaced by Benjamin Franklin, the first postmaster general appointed under the Continental Congress.

The replacement was explained in a letter of March 20, 1847, written by the printer to the assistant postmaster general: “In accordance with your suggestion, we have substituted the Head of Franklin for that of Gen. Jackson, which our Mr. Rawdon was requested to use by the Post Master General.”

Franklin’s portrait, based on artwork by James B. Longacre, would be more acceptable as a unifying icon for the divided nation because of his role in securing independence for the country. Both the 5c Franklin and 10c Washington stamps became valid for use on July 1, 1847. The 5-cent Franklin stamp paid the rate for a letter per half-ounce sent under three hundred miles.

The front of this coin shows an image of the first 5c US postage stamp with a portrait of Benjamin Franklin.

Approved by Buckingham Palace, the back of the coin bears a fine effigy of Her Majesty Queen Elizabeth II by Ian Rank-Broadley FRBS.

This Benjamin Franklin Commemorative Titanium Proof Coin makes a great collectible gift for yourself or any coin, stamp, or American History collector. 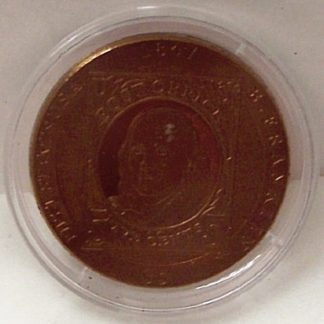