Captain America was designed during WWII as a patriotic super soldier; he  wears a costume that bears an American flag motif, and is armed with a nearly indestructible shield that he throws at foes.

This Hallmark Captain America collectible makes a great gift for yourself or someone you know.

Captain America wears a costume that bears an American flag motif, and is armed with a nearly indestructible shield that he throws at foes. The character is usually depicted as the alter ego of Steve Rogers, a frail young man enhanced to the peak of human perfection by an experimental serum to aid the United States government’s efforts in World War II. Near the end of the war, he was trapped in ice and survived in suspended animation until he was revived in the present day. Although Captain America often struggles to maintain his ideals as a man out of his time with its modern realities, he remains a highly respected figure in his community which includes becoming the long-time leader of the Avengers.

Marvel’s “Captain America: Civil War” finds Steve Rogers leading the newly formed team of Avengers in their continued efforts to safeguard humanity. But after another incident involving the Avengers results in collateral damage, political pressure mounts to install a system of accountability, headed by a governing body to oversee and direct the team. The new status quo fractures the Avengers, resulting in two camps—one led by Steve Rogers and his desire for the Avengers to remain free to defend humanity without government interference, and the other following Tony Stark’s surprising decision to support government oversight and accountability.

With this ornament, you can view Captain America from the front and behind.

Box may have minor imperfections as sold new such as creases, rips, and tears.

Ornament may have minor imperfections such uneven color, worn finish, nicks, and scratches as sold new by Hallmark.

We are selling this item as a collectible, not as a toy.

This Hallmark Captain America collectible makes a great gift for yourself or someone you know. 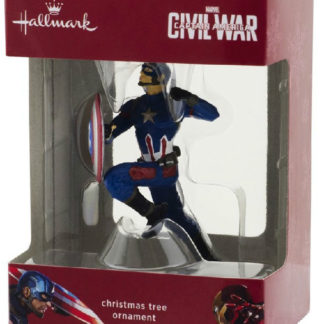