Hollywood Studios  was previously called “MGM Studios.”  In fact, MGM Studios opened in 1989.  Notably, on the face of the figure is the giant Sorcerer Mickey hat that represents the park.  Further, on the back of the head is the 40th Anniversary Logo.  Importantly, this 3 inch high vinyl figure has poseable arms and head.  Finally, includes companion collector’s card.

Photos showing figures out of box are stock photos.

Get this Disney Hollywood Studios Vinylmation Figure for yourself.  Or give it to someone you know!

The magic that began in Florida in 1971 is saluted in this Vinylmation WDW 40th Anniversary Series 3″ Figure — Hollywood Studios.

Hollywood Studios was once called “MGM Studios.”  In fact, MGM Studios opened in 1989.  Notably, on the face of the figure is the giant Sorcerer Mickey hat.  Indeed, that hat is the park’s symbol.  Besides, on the ears are stars.  Further, on the back of the head is the 40th Anniversary Logo.

Of course, vinylmation is the original vinyl figure inspired by the Disney Theme Parks.
In fact, this is 1 of 6 designs in the WDW Resort 40th Anniversary series.
Also, this 3 inch high vinyl figure has pose-able arms and head.
Finally, includes companion collector’s card.

Vinylmation is a series of collectible vinyl designer toys .  Further, Disney theme parks sell them.  Also, each figure is in the shape of Mickey Mouse.  Besides, each features artwork by various artists.  In fact, figures are available in 3″ and 9″ varieties.  In fact, official trading at Disney parks has ended.   However, private trading still is common.

Also, photos of out of box are stock photos.

Further, color of item you get may vary.  Due to different dye lots.

Also, box may have minor shelf wear as sold by Disney.   This includes rips, tears, folds, and/or creases.

Surely, not for children.

Get this Disney Hollywood Studios Vinylmation Figure New for yourself.  Or give it to someone!

Please read this listing carefully.  And ask questions before buying so you are fully satisfied. This listing includes free shipping to USA.  Ships by USPS First Class Mail.  With delivery confirmation. 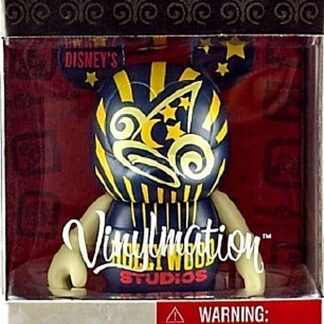