Surely, buy this Early TV Memories Sheet of 20 Black & White 44 Cent USPS Stamps as a great gift for yourself or someone you know!!!

This listing is for one New:

Before the Golden Age of Television hit in the 1950s, the medium had already given the growing viewing audience some hints of what it could achieve. The 1940s saw the arrival of Milton Berle on Texaco Star Theatre, The Ed Sullivan Show (a variety showcase that would run from 1948 to 1971); kids fare like Howdy Doody, Kukla, Fran and Ollie and Captain Video and His Video Rangers; early sitcoms in the form of The Morey Amsterdam Show (before he became a part of The Dick Van Dyke Show in the ’60s); and The Lone Ranger. But the true arrival of Classic TV would come in the 1950s.

How can you consider the idea of television classics without thinking of I Love Lucy, The Honeymooners, Father Knows Best, Leave It to Beaver, The Jack Benny Program, Lassie or Adventures of Superman?

In the more than two centuries since Benjamin Franklin was our first Postmaster General in 1775, the Postal Service™ has grown and changed with America, boldly embracing new technologies to better serve a growing population. In 1847, the US Post Office issued the first U.S. postage stamps. Further, in 1893 it issued the first commemorative stamps. Next, Parcel Post® began in 1913. Then, in 1918, scheduled airmail service began. Importantly, a major advance was the ZIP Code inauguration in 1963. Noteworthy, on July 1, 1971, the Post Office Department was transformed into the United States Postal Service when it became an independent establishment of the executive branch of the U.S. government. A postal career service began and political appointments to Postal Service jobs were prohibited, a framework that still stands today.

Further, may have minor imperfections as sold by USPS such as folds and creases and some stamps adhesive may be losing stickiness.

IMPORTANTLY, COLLECTIBLE – NOT FOR CHILDREN.

Surely, buy this Early TV Memories Sheet of 20 Black & White 44 Cent USPS Stamps as a great gift for yourself or someone you know!!!

Surely, ask questions before buying so you are completely satisfied with your purchase. 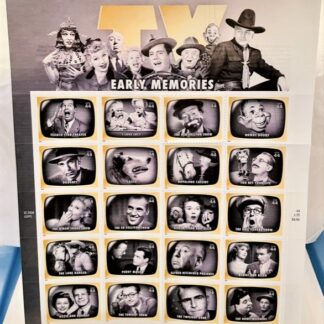