This limited edition Annual Passholder pin features Figment at the Epcot® Theme Park in front of Spaceship Earth.  Notably, the pin has a pin-on-pin element.  This cute pin is the third pin in a series of four.

Buy this Disney Figment Epcot Passholder LE Pin New  to collect yourself.  Or give it to someone you know!

This listing is for One New Sealed on Special Card:

This pin was only available to Passholder members who had to present valid Walt Disney World Resort ® Passholder ID to purchase this pin.

This limited edition Annual Passholder pin features Figment at the Epcot® Theme Park in front of Spaceship Earth.  Notably, the pin has a pin-on-pin element.  In fact, this cute pin is the third pin in a series of four.

The other three (3) pins included in this set are:
Firstly,  Pluto at Disney’s Hollywood Studios in front of the Hat icon.
Next, Figment at Epcot in front of Spaceship Earth.
Finally, Stitch at Disney’s Magic Kingdom Castle.

This listing is for one pin only, the Figment from this set.

This listing is for one pin only, the Figment from this set.

Figment is the beloved purple dragon Disney featured in all the various versions of the Epcot attraction Journey Into Imagination.  Further, he starred in a series of Epcot Educational Media short films made for schools and starred in two comic book series produced for Marvel Comics’s Disney Kingdoms line.  Notably, Figment’s description theme is found in the song “One Little Spark”.

In the original version of the ride, Figment acts like a young and curious student of the imagination to Dreamfinder.  In contrast, in the current version, he is well aware of what imagination is and is mostly a prankster.  Indeed, he pulls tricks on Dr. Nigel Channing until he is willing to listen to him and his lesson that imagination works best when set free.

One of 4 theme parks at Walt Disney World Resort, Epcot theme park sprawls across 300 acres.  In fact, it is twice the size of Magic Kingdom park and divides into Future World and World Showcase.  Here, creativity is encouraged, imagination is celebrated and countries are united.  Surely, be amazed, inspired, enlightened and entertained!

Noteworthy, Disney sells these items as new with minor imperfections.  Back of pin may have spotting, toning, discoloration, and/or oxidation.

Buy this Disney Figment Epcot Passholder LE Pin New  to collect yourself.  Or give it to someone you know! 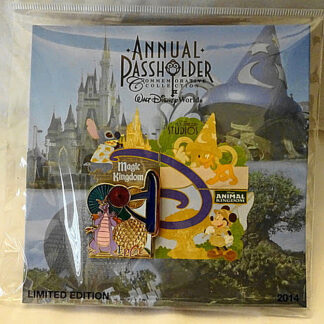