AGE is an issue of mind over matter. If you don’t mind, it doesn’t matter.“
MARK TWAIN FAMOUS QUOTE MAGNET NEW.

GREAT FOR YOUR FRIDGE!  ABOUT 3 X 2 INCHES.  SIGNIFICANTLY, MADE IN USA.

Buy this Mark Twain Famous Quote Magnet for yourself or someone else!

“AGE is an issue of mind over matter. If you don’t mind, it doesn’t matter.“
MARK TWAIN FAMOUS QUOTE MAGNET NEW.

FIRSTLY, GREAT FOR YOUR FRIDGE!
ALSO, ABOUT 3 X 2 INCHES.
SIGNIFICANTLY, MICHAELS MADE THIS IN USA.

Mark Twain, orig. Samuel Langhorne Clemens, (born Nov. 30, 1835, Florida, Mo., U.S.—died April 21, 1910, Redding, Conn.), U.S. humorist, writer, and lecturer. He grew up in Hannibal, Mo., on the Mississippi River and was apprenticed in 1848 to a local printer. He received a riverboat pilot’s license in 1859 and later moved on to Nevada and California. In 1863 he took his pseudonym, the riverman’s term for water 2 fathoms (12 ft [3.7 m]) deep. In a California mining camp he heard the story that he first published in 1865 and made famous as the title story of his first book, The Celebrated Jumping Frog of Calaveras County and Other Sketches (1867).

He traveled widely, using his travels as subject matter for lectures and books, from the humorous narratives The Innocents Abroad (1869) and Roughing It (1872) to Life on the Mississippi (1883), his reflections on being a riverboat captain. He won a worldwide audience for his adventure stories of boyhood, especially Tom Sawyer (1876) and Huckleberry Finn (1885), one of the masterpieces of American fiction. The satirical A Connecticut Yankee in King Arthur’s Court (1889) and increasingly grim works including Pudd’nhead Wilson (1894) and The Man Who Corrupted Hadleyburg (1899) followed.

In the 1890s financial speculations bankrupted him. His eldest daughter died in 1896, his wife in 1904, and another daughter in 1909. He expressed his pessimism about human character in such late works as the posthumously published Letters from the Earth (1962).

Collecting magnets is a hobby.  Importantly, some collect magnets from their travels.  Others collect magnets with a theme.  Further, souvenir shops worldwide sell magnets.  Indeed, there is no universal term for magnet collecting.

At one time, Louise J. Greenfarb from Nevada owned the largest verified collection of refrigerator magnets.  In 1997, Guinness World Records cited her world record of 19,300 items.  In addition, according to the British “Book of alternative records,” it later grew to over 30,000 items.  Also, over 7,000 magnets from Greenfarb’s collection once were shown at the now closed Guinness Museum.  As of November 2015, Louise has around 45,000 plus non-duplicate refrigerator magnets.  However, the Guinness process is too taxing to keep checking the exact number.

ALSO, PACKAGE HAS MINOR SHELF WEAR.  NOTABLY, MAY INCLUDE FOLDS, CREASES, AND/OR SMALL RIPS OR TEARS.

FURTHER, PACKAGE YOU RECEIVE MAY DIFFER FROM THAT SHOWN.  BUT WILL BE IN SAME GENERAL CONDITION.

COLOR MAY DIFFER FROM THAT SHOWN AS DYE LOTS VARY.

Buy this Mark Twain Quote Magnet for yourself or someone else! 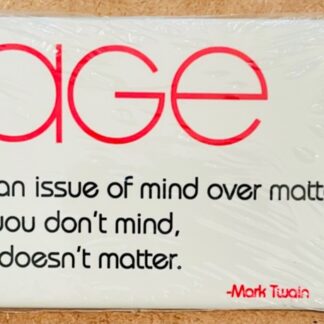