This Marvel Pop Funko Taskmaster  collectible makes a great gift for yourself or someone you know.

This listing is for one new in box:

The man who would become the Taskmaster is born a prodigious savant of mnemonic talents in the Bronx.  He discovers his unusual abilities in childhood.  After watching a cowboy television program, he finds he can duplicate the actor’s rope tricks.  Growing to understand his ability, he sees a man perform a difficult backwards leap from a diving board.  He duplicates the dive, but nearly drowns because he does not know how to swim.  Afterwards, his mother calls in psychiatrists.  These doctors study his ability, terming it “photographic reflexes.”  He revels in his abilities in his youth.  He even becomes his high school football team’s quarterback after watching one professional football game.  After graduating high school he contemplates becoming a Super Hero.  Instead, he decides crime would be more lucrative.

Last 2 photos above are stock photos.

Box may have minor shelf wear as sold new by Walgreens.

These figures as sold new have minor scuff marks and uneven paint.

Colors of figure and box you receive may vary from that shown as dye lots vary.

This listing is for only one #124 Marvel Pop Funko Figure  – the  Taskmaster only!

This Marvel Pop Funko collectible makes a great gift for yourself.  Or someone you know. 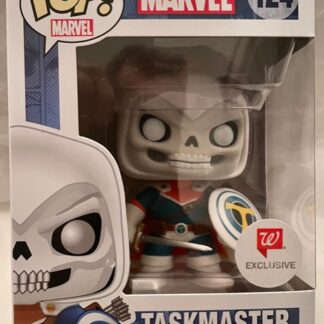